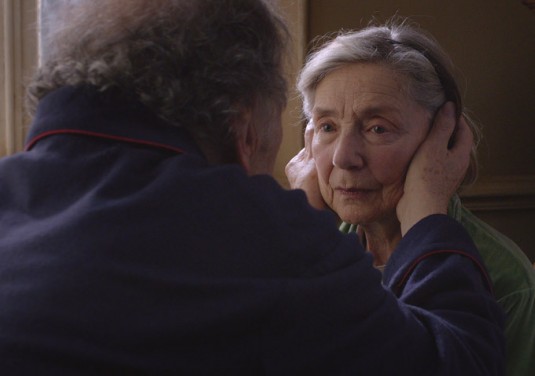 Michael Haneke’s latest film is a good poster child for why mainstream movie audiences fear and avoid many foreign films; it is quiet, slow and relentlessly depressing.  After winning the Palme d’Or in 2009 for The White Ribbon, Haneke officially established himself as a “Cannes auteur,” a director whose latest work would forever and always have a place in the festival’s cannon.

Amour is wondrously, deliberately hopeless.  Its depiction of an elderly woman’s slow, painful crawl toward death after suffering a series of strokes is not peppered with melodrama or any sort of dramatic flourish.  Haneke seems to think this would make the situation too comfortable, too much like a movie.  The goal of this film is to show the situation in as realistic light as possible, but from a removed distance.

To pull off the kind of extended takes the movie calls for, Haneke of course needs actors up to the task.  He finds them in Jean-Louis Trintignant and Emmanuelle Riva, who give the the kind of ego-stripped performances the script requires.  Much of the movie is motionless; existing simply as a slow crawl toward death.

The surprise of this casualty is also non-existent because it is shown to us in the beginning.  Haneke has made a career out of ruining and subverting cinema’s “big reveal” from Cache’s decidedly vague conclusion to Funny Games’ horrific rewind.  His pay-off free cinema is a commentary on the way audience’s are often coddled and pandered to, which of course gives him a very niche market in the U.S.

Nothing will change with Haneke’s reputation after this latest film.  It is not peppered with intrigue to distract from its narrative innovation, and instead relies purely on its form to inject interest.  There’s nothing necessarily wrong with this approach, but it makes Amour impossible to enjoy.  It is, however, endlessly fascinating to think about afterward.

After the movie’s startling spoiler prologue, we are shown a wide angle shot of a crowded  theater, much like the one many will sit in to experience the film.  This creates a mirror effect that forces us to scan the crowd for some sort of narrative action going on.  However, there is nothing really going on but typical pedestrian conversations.

Of course the focus narrows eventually, honing in on the elderly Parisian couple so much so that they are often the only characters on screen for much of the movie.  Anne (Riva) suffers a stroke, which cripples the right side of her body and leaves her in the care of her husband Georges (Trintignant).  They are occasionally visited by their successful daughter Eva (the wonderful Isabelle Huppert), who grows more and more concerned as her mother’s condition worsens.

Haneke doesn’t relent with just the illness, though.  He dives into the characters’ darker psychological impulses with no sympathy and disturbing casualness.  Other than a few hallucinatory dream sequences, he plays it fairly straightforward.  The distance he places the audience from the emotion of the story will turn off many looking for a payoff, and that’s sort of the point.  This is a story of human suffering, and there are no rewards.