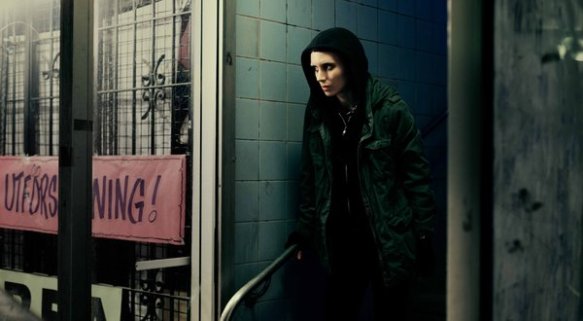 Everything surrounding this American adaptation of a best-selling Swedish book seemed like a perfect fit.  Who better to chronicle a dark story about a serial killer that involves a clever computer nerd than David Fincher?  It’s a combination of everything he’s done so well as a director, from Zodiac to last year’s The Social Network.

Add in a cast full of talented character actors and a breakthrough star performance from the unknown actress Rooney Mara, and it sounds like a filmmaking and financial grand slam.  Though Fincher weaves his distinct visual pleasures through Steve Zaillian’s condensed/slightly altered version of Stieg Larsson’s bulky narrative, Girl With the Dragon Tattoo is a long movie filled with many names, twists and bursts of violence.

Unlike what he did with Zodiac, Fincher plays this thriller fairly straight forward, peppering those outbursts of violence throughout instead of front-loading them and then focusing on the investigation.  It’s less innovative to be sure, but those scenes still don’t feel like demented rewards as they do in many slasher films.

This Sweden is a dark and treacherous place, and the gorgeous, dark cinematography and the outstanding score by Trent Reznor and Atticus Ross blends with it perfectly.  While the original Swedish film adaptation of this material successfully conveyed and maintained that mood of dread, it fell short in engaging with the narrative.  Fincher and Zaillian work seamlessly to condense the story to a satisfying film version, using montage and flashback sequences to great effect instead of bogging the story down with over-explanation.

Those scenes are truly where Reznor and Ross’ score shines, its brooding synths creating a mood of dread as disgraced journalist Mikael Blomkvist (Daniel Craig) and hacker Lisbeth Salander (Mara) plunge into a decades-old mystery.  Hired by Henrik Vanger (Christopher Plummer) to investigate his niece’s disappearance, the two eventually stumble into a much larger serial murder case involving the Bible-based execution of women.

Though none of those murders actually take place during the movie, Salander receives more than her fair share of torment.  A social outcast and ward of the state almost her entire life, her extremely slender frame, tattered black hair and clothes, her piercings and her piercing eyes tell a horrible story of abuse and neglect.  She is subjected to brutal rape at the hands of her state-appointed guardian, but she refuses to remain a victim, and performs a startling act of vengeance not long after.

Mara carries her through all of this with a terrific lead performance.  Craig keeps a calming presence about Blomkvist, playing him as a cautious man in hiding who is intent on redeeming himself through this investigation.

Fincher plays this version much like the book, allowing the movie to progress to almost half its length before actually putting the two main characters together to team up on the case.  Blomkvist retreats into the Vanger compound in the north of Sweden to escape his tarnished reputation after he put false information in a story about a business tycoon.  Salander deals with the aforementioned guardian as well as the toils of everyday living as a hacker and cutthroat researcher.

In their way, both Blomkivist and Salander are outcasts, but what’s more important is the way the story builds their old school/new school methods of investigation.  It’s a thread that runs through much of the story and is even present with the killer.  Blomkvist believes what Salander does is unethical, but only when it concerns her looking into his life to perform a background check for Henrik.  He comes to terms with it, for better or worse, mostly because Salander never wavers.

Book-ending the Vanger murder mystery is the story of Blomkvist’s career plunders and redemption.  Thankfully the screenplay rushes through the beginning of it, where Larsson lingered on it for more pages than it merited.  The movie also speeds through the ending as well, and though it touches on every major event, the two sequences together feel like unrelated episodes when paired with the whole even if the murder mystery transitions back into that libel suit.

Henrik Vanger promises Blomkvist the information he needs to take down that business tycoon if he helps him with this case, and it gives him the motivation to really dig.  Salander sees the crimes against women as a just cause, and her own horrendous experiences with that fuel her rage.  She is a tortured soul for the ages, a gothic Clarice Starling who fights back against the cruelty of the world with her computer, a taser and the occasional golf club swing to the face.

3 thoughts on “REVIEW: The Girl With the Dragon Tattoo”