The biggest asset The Hunger Games has in both the book and the movie is its insistence on making you think about war as a meaningless, almost ritualistic sacrifice of a country’s youth.  As many are likely aware by now, it is the story of Katniss Everdeen (Jennifer Lawrence), a gritty young woman raised in the poverty of a dystopian future.

She is chosen along with a young male tribute (Josh Hutcherson) to represent her district, District 12, in the country’s annual Hunger Games “celebration.”  This consists of 22 other tweens and teens being thrown into an arena and fighting to the death.  The winner returns a war hero, a champion lauded with spoils and congratulated for being turned from child to murderous shell.

Few have rejected the appeal of the story, written in a feverish, consistently thrilling fashion by Suzanne Collins, who also co-wrote this movie adaptation’s screenplay.  Because we are inside Katniss’ frantic, spunky head throughout the book, there is hardly a dull moment.  This is the biggest mistake the movie makes, placing us at an often cold distance and having us be spectators along with the audience. 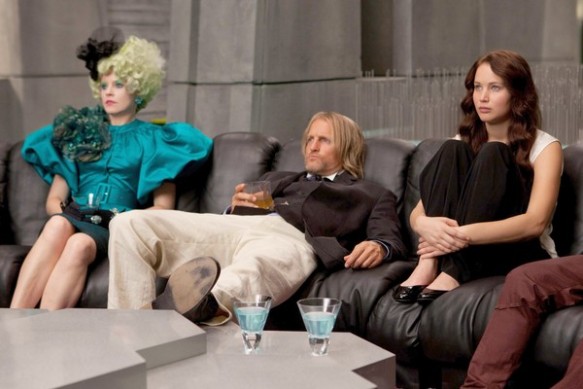 Director Gary Ross insists on propelling the plot forward just as quickly as the book, ripping Katniss away from her family and friends after only 10 minutes of the movie.  This also lacks a uniform vision that was in the book; the high-end glamor of the capital should be vastly different from the poverty of District 12 and the woods of the Games, but it also appears to be directed and art directed by completely different people.

Katniss is apparently supposed to be scarred by the sudden change, but the way Jennifer Lawrence comes across, she couldn’t care about much of anything most of the time.  Aside from colorful supporting performances from Elizabeth Banks, Stanley Tucci and Woody Harrelson, the acting is either uninspired or, in the case of the other tributes, awful.

The Hunger Games doesn’t really work as a movie, which isn’t to say its horrible but just fundamentally flawed from the beginning.  Failing to have a relatable character to take us inside the barbaric ritual turns it into a watered down version of the cult classic Battle Royale.  The fighting in that movie is decidedly more barbaric, though Ross still makes you feel much of the brutality by knowing when to cut to stretch the bounds of the PG-13 rating constraint.

Katniss running, diving and shooting her bow is the most endearing thing about the film adaptation, though.  There is a mild love interest with the other male tribute, Peeta, but the script thankfully seems to roll its eyes and speed through it and the aftermath of the games.  Despite that rushing, it still clocks in at almost two-and-a-half hours.

It’s not a punishing duration because it isn’t mind-numbly dull and the themes remain somewhat in tact, but it feels thrown together and edited into mediocrity.  Lawrence and Hutcherson are both capable actors (see Winter’s Bone and The Kids Are All Right, respectively), who are either too intimidated to get into it, or left their good performances on the cutting room floor.  Collins penned an interesting if not revolutionary young teen read that, thanks to an interesting heroine, became somewhat of a sensation.  The studio should’ve called David Fincher.

5 thoughts on “REVIEW: The Hunger Games”