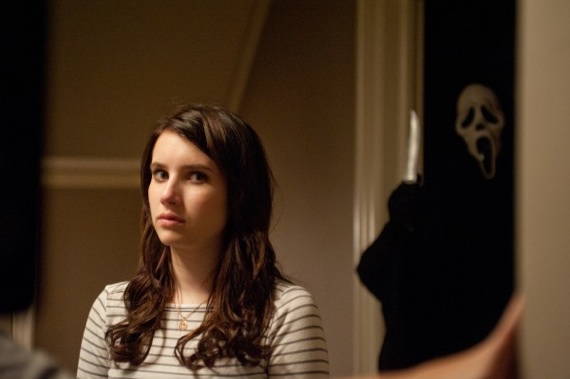 Scream 4 makes you wonder what other veteran directors would do if they were offered the chance to comment on the modern state of their respective genres.  How would Alfred Hitchcock approach Hanna?  How would Billy Wilder tackle Your Highness?

Sadly, instead of real filmmakers taking a stab at the confines of their own genres, we get films like the Scary Movie franchise, which set out to mock, scored a few laughs in the first few films, and then became a mockery.  The state of modern movies is just that: movies unintentionally mocking their genres, so much so that it may be hard for many in a modern audience to realize Scream 4 is doing it intentionally.

Director Wes Craven tackles the endless remake cycle of the modern studio system with one of his own.  We follow Sidney Prescott (Neve Campbell), as she returns to Woodsboro to promote her book about surviving the Ghostface Killer.  After a slew of false openings in which different sets of female friends meet their bloody end in different bad horror remakes, we dive into an intentionally bad horror remake in which Sidney must now protect her cousin (Emma Roberts) and her friends from bloody demise.

Scream 4 is a fun movie, one that rotates between shrieks of laughter and terror.  The site of the Ghostface Killer slicing through the frame and going directly for the kill is visceral business.  The overly self-aware “meta” generation, though, could’ve used a little more polish before they were carved up.

Craven sometimes succumbs to the failings of the genre he is mocking.  Neve Campbell, Hayden Panettiere, Emma Roberts and Alison Brie do bad acting well (that’s a compliment).  The rest of the cast, either by way of the screenplay or by way of inexperience, don’t quite get what Craven and screenwriter Kevin Williamson were getting at.

Subtlety is another thing Craven does without during the movie, which is decidedly welcome given that he’s making a mock-slasher.  Having the characters explain their predicament throughout the first half gets boring, especially when you compare it to the second half, when everyone starts actually having fun.  Watching a character become a martyr for their own internet fame is poignant commentary, especially because it’s shown visually and not verbally.

Many points of this movie will be lost on an audience that’s expecting a kill around every corner, though.  The “We’re in a horror movie!” shtick works on and off, usually when it stops saying it’s a horror movie and actually becomes one.

Craven returns to the horror scene at an interesting time.  He released Scream 3 the same year as the first Scary Movie.  Now that that franchise has died in a watered-down blood pool of its own self-mockery, he returns to form here.  The interesting thing about it, is that if he leaned more on the comedy, this could actually be a successful installment of Scary Movie.  Like Sam Raimi, though, Craven loves horror more than comedy.

Scream 4 recalls Raimi’s Drag Me to Hell as well, which is disappointing because it’s nowhere near as good.  The first half is boring, but the second half thankfully goes in for the meta kill instead of the human one.  Craven’s success with the numerous false endings is much better than his skill with the fake openers, which means that maybe (hopefully), he’s just getting started (again).