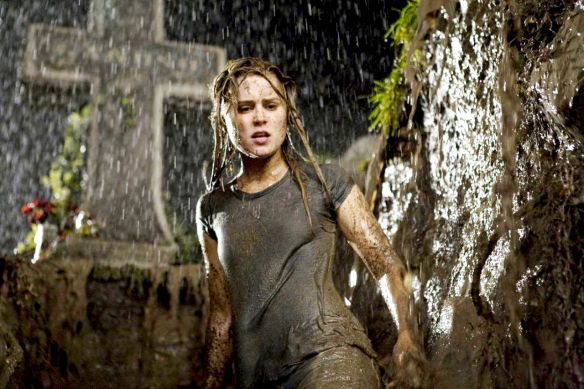 Horror comedy may be the most difficult genres to mix together successfully.  You wouldn’t think that, as these days horror movies like the Saw series are laughable and the endlessly cliched comedies become more horrendous.  Sam Raimi, however, has proven himself a master of the genre.

Before he “sold out” (brought life) to the first two Spider Man movies, he was nothing more than a low-budget director of horror comedies that collected a cult following that included some unashamed critics.  With Drag Me to Hell marking his return to that genre, consider me one of the recently unashamed.

Not only is this one of the funniest films of 2009, it’s also one of the grossest and even scariest.  With most directors, you either lean on the horror or the comedy, but Mr. Raimi walks the tight rope of both and succeeds admirably.  His film is relentlessly entertaining.

What’s even more respectable about this gross-out is that it’s not based on anything.  It’s fresh, original, and gleefully exploits both audience expectation and horror movie cliche.  A perfect example is the parking lot scene, where our young heroine Christie Brown (Alison Lohman) strolls across the lot alone at night.  Perfect opportunity for the gypsy (Lorna Raver) she’s wronged by refusing her a loan extension to ambush her.  She doesn’t.  Instead, the tension is ramped up until a handkerchief provides the biggest audience shriek it could ever achieve.  Then… the old woman appears and a laugh/scream car fight for the film hall of fame begins.

Raimi has never been a keen scripter of dialogue (most notably in the horrendous Spider Man 3), but here his script is pitch-perfect partly because the dialogue can be cheesy in places.  He and brother Ivan Raimi know the places.

The cast that delivers the gross goods also couldn’t be better.  Alison Lohman is terrific in a role originally intended for Ellen Page.  If she wants to play Juno until the end of time, so be it.  Lohman won me over even if she comes down on the wrong side of a moral dilemma.

Justin Long is also great as the loyal yet skeptical boyfriend.  He delivers sly one-liners with keen comedic precision while also nailing the charm vital to keeping his part from becoming farce.

As a whole, Raimi has made a successful exercise in horror comedy.  While the PG-13 rating does hold it back a little, the Unrated Edition really lets Raimi let his freak-out flag fly.  Check it out to see 90% of horror and comedy filmmakers put to shame.

4 thoughts on “ARCHIVE REVIEW: Drag Me to Hell”