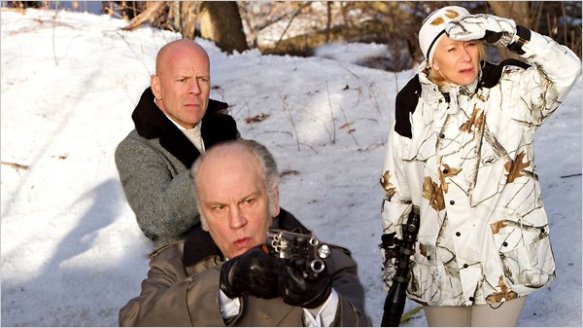 How do you confront aging?  Many don’t, avoiding the fact that they’re retired with hobbies, community service, or a condo in Florida.  The aging agents of Red charge straight ahead with guns blazing.

If this movie were to be described in one way, it would have to be an adolescent revenge fantasy aimed at Baby Boomers.  It’s for every mid-life-crisis-stricken adrenaline junkie who wants to make the whipper-snappers pay for looking at them like they’re unhip.  Of course, since this is a big-budget Hollywood action film with A-list names, there’s something everyone will enjoy, even if none of it is anything new or even good.

The plot is straightforward enough, Frank Moses, a retired CIA black ops agent, tracks an intricate web of government espionage alongside his other aging comrades and his newly found love interest Sarah (Mary Louise-Parker).  He meets her by pretending to never receive his pension checks and calling her to flirt.  Next thing her and the audience know, bullets fly, buildings collapse, one-liners are delivered, and the good guys save America, again.

Red is hypocritical in that it wants to make its audience feel young with the most recycled plot strands in movie history.  The unlikely couple thrown into a web of espionage, the good guys coming together “one last time” to take on the ultimate evil, the non-shocking shocker of an ending where the real bad guy is revealed- I could go on and on, but you get the idea.

The only saving grace in this movie are the actors, who all are well-cast and seem to be having fun.  Watching Morgan Freeman, John Malkovich, and Helen Mirren kick ass on screen together should be a treat for anyone, and it is even in the safe confines of a PG-13 rating. They’re all there for the paycheck, but unlike most, they actually put the effort in to give the movie a little jolt of escapist fun.

Outside these few moments of adrenaline-soaked elderly mayhem, this movie is boring and conventional.  The visuals don’t particularly wow.  Director Robert Schwentke clearly had too much money riding on this movie to take any real risks.

From start to finish, Red is a stylized, completely choreographed and neatly packaged action film that is intended to elicit certain gasps and laughs at precisely timed moments.  It’s supposed to make you feel like you got your money’s worth, though if you spent your pension money on it, you probably didn’t.