1. Krisha Fairchild- Krisha- Even though our introduction to the title character of Trey Edward Shults’ debut film seems relatively calm at first, erratic energy soon reverberates off of her.  Krisha mutters to herself as she exits her vehicle, stops mid-track to retrieve her suitcase and then trudges through a lawn until she arrives at the front door of her sister’s house.  She is there to make amends for her turbulent past, but the reunion only causes her to retreat back into it, opening up old wounds and carving out fresh ones. The camera shares her frantic perspective, sometimes observing at a nervous distance and other times focusing on Fairchild’s face as she searches for a way back into the family. She gives a volatile tour de force here, playing Krisha as a woman who desperately wants to make things right but is unable to escape her demons.

2. Casey Affleck- Manchester by the Sea- Kenneth Lonergan’s third feature is one of the great recent films about guilt and grief.  At its center is Lee Chandler (Affleck), a man drawn back to his hometown Manchester from Boston after the death of his brother.  He’s shocked to find out that his brother’s will leaves him custody of his teenage nephew, and he’s forced to linger in town as he decides what to do.  Manchester is a place of unspeakable pain for him, and Affleck is tremendous at showing the weight of his character’s torment in both the present and in the movie’s many extended flashbacks. 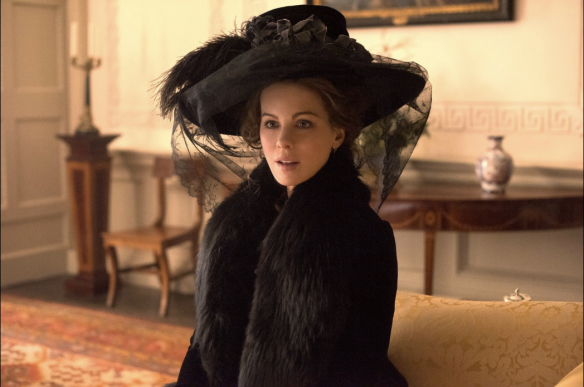 3. Kate Beckinsale- Love & Friendship- Lady Susan Vernon knows the rules.  The 18th century widow knows them better than nearly everyone else in Whit Stillman’s witty, sharp-tongued comedy of manners, and how to use them to get what she wants.  Kate Beckinsale relishes each of the many, varied barbs Lady Susan throws at the web of aristocrats she’s forced to tolerate as she pursues suitable husbands for both her and her daughter.  Her ruthless comic timing and unbreakable poise are crucial to the movie’s success.

4. Lily Gladstone- Certain Women- Lily Gladstone gives the breakout performance of the year in Kelly Reichardt’s latest film, which is divided into three segments about women living on the Montana plains. As a rancher inexplicably drawn to a lawyer (Kristen Stewart) teaching a night class in her town, Gladstone anchors the movie’s third and most emotionally resonant segment. The close-ups of Gladstone’s face draw out a profound yearning in her unnamed character, a woman awakened after unexpectedly breaking the tediousness of her everyday life.

5. Rebecca Hall- Christine- On July 15, 1974, local TV reporter Christine Chubbock shot herself in the head during a live broadcast at her station in Sarasota, Fla. Chubbock, as played by Rebecca Hall, struggled with a debilitating depression in a world that didn’t seem to know how to handle it, or didn’t want to acknowledge it. Hall’s powerful performance carries Christine past some of the script’s overbearing conversations about the state of the TV news. Her body language is fine tuned to Chubbock’s internal anguish, the way she tenses up and then unleashes bursts of emotion at her co-workers and her mother.

6. Viola Davis- Fences- Viola Davis is one the most consistently thrilling American actresses working today, and that is only further cemented in Fences, Denzel Washington’s film adaptation of the August Wilson play. Rose is the weary glue attempting to hold together the Maxson family as her husband Troy (Washington) and son Cory (Jovan Adepo) continue to clash over Cory’s desire to play college football.  Most of the movie is set in the family home in 1950s Pittsburgh. At first it’s a somewhat inviting place, even if Troy’s overbearing demeanor makes people walk on eggshells around him. As the movie wears on, and the generational conflict between Troy and Cory comes to a head, it feels more and more claustrophobic. Rose is forced to confront her husband’s ugly side, and Davis’ thunderous performance in the movie’s second half unleash a torrent of repressed pain and unfulfilled desires.

7. Hailie Steinfeld- The Edge of Seventeen- After a breakout role in the Coen Brothers’ 2010 take on True Grit and a string of solid turns in films like Pitch Perfect 2 and Enders Game, Hailee Steinfeld further establishes herself as one of the most talented young actresses working today in The Edge of Seventeen.  Kelly Fremon Craig’s debut feature is a hilarious and poignant coming-of-age tale, one that hones in on teenage anxiety and depression with tremendous empathy.  After her father’s death, Nadine (Steinfeld) hides behind a shield of detachment and sarcasm. Steinfeld delivers Fremon Craig’s whip-smart dialogue while showing the cracks in her character’s facade. 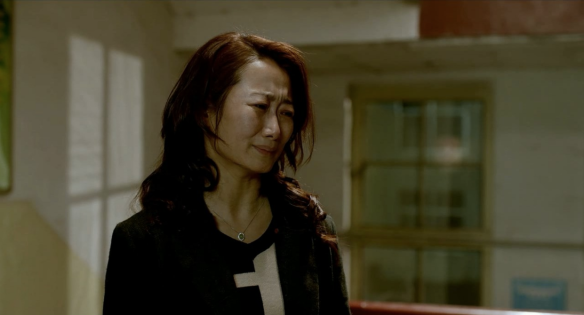 8. Zhao Tao- Mountains May Depart- Told over the span of 26 years, Jia Zhangke’s latest film is a chronicle of the seismic shifts in Chinese society that is centered around a woman named Tao and her friends and relatives.  Beginning in 1999, Tao finds herself in the middle of two warring suitors.  She decides to marry Jinsheng, the wealthier of the two who owns a coal mine.  Once the two have a child together, the movie skips ahead to 2014.  A now-divorced Tao is reunited with her young son after the death of her father.  This middle segment is where Zhao Tao’s performance truly takes hold of the movie.  The despair Tao feels over her dad’s death and the uncertainty over how to interact with her son are heartbreaking. 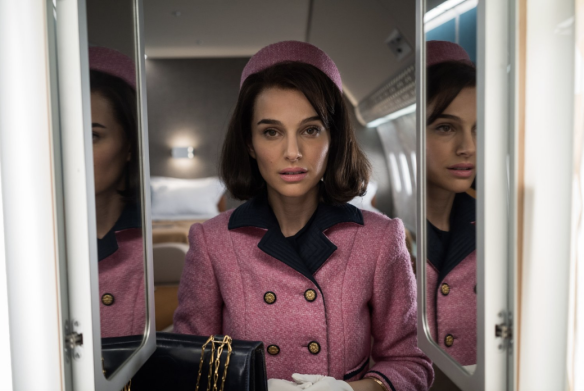 9. Natalie Portman- Jackie– The Jackie Kennedy of Pablo Larrain’s audacious biopic is a woman attempting to guide the narrative after her husband’s 1963 assassination while simultaneously mourning him. Structured around the first interview she gave after JFK’s death, the movie is a bombardment of intense, emotional flashbacks offset by her attempts to wrest control of the family legacy.  Portman delivers a wrenching portrait of personal grief in the worldwide spotlight, whether it’s exercising an uncomfortable calm while wearing her still-bloody pink suit on a plane after her husband is shot or talking candidly with her brother-in-law Robert Kennedy (Peter Sarsgaard) or her priest (John Hurt). 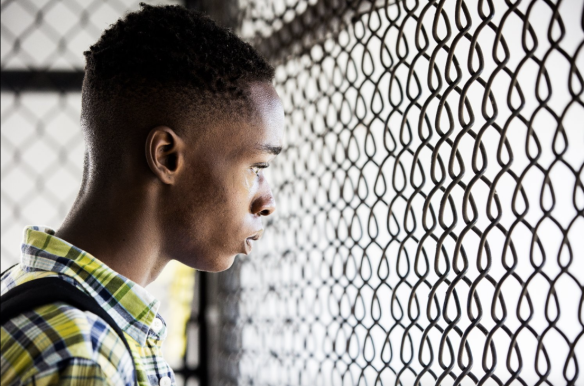 10. Ashton Sanders- Moonlight- Barry Jenkin’s Moonlight tells the story of Chiron at three different stages, when he’s a young boy, a teenager and an adult.  Sanders portrays the teenage Chiron, a high school loner who is relentlessly bullied, and who internalizes his torment because he has no outlet. The way Sanders lets Chiron’s nervous energy play across his face, or how he seems surprised by simple acts of kindness, is devastating.

11. Kim Min-hee- The Handmaiden- Lady Hideko is a woman who has lived a life of seclusion and torment at the hands of her perverted uncle.  In the first act of Park Chan-wook’s lavish, elaborate The Handmaiden, she’s little more than a mark, targeted by a con-man and a pickpocket for her vast family fortune.  However, as Park continues to shift the nature of his movie’s con, he takes the story backwards and deepens its characters. Hideko becomes much more than a cipher, and Min-hee expertly peels back the layers of her character’s hidden agenda.

12. Ralph Fiennes- A Bigger Splash- Ralph Fiennes seems to be having a blast in A Bigger Splash, Luca Guadagnino’s transfixing, sun-drenched pool party.  He gives an unexpectedly aggressive performance as Harry, a man who crashes the relaxing island retreat of the rock star Marianne Lane and her lover.  Fiennes buries Harry’s jealously toward Marianne and Paul’s happiness with rambunctious acts of attention-seeking.  The most memorable of these is an electric dance along to The Rolling Stones’ “Emotional Rescue” that would win any given episode of Lip Sync Battle. 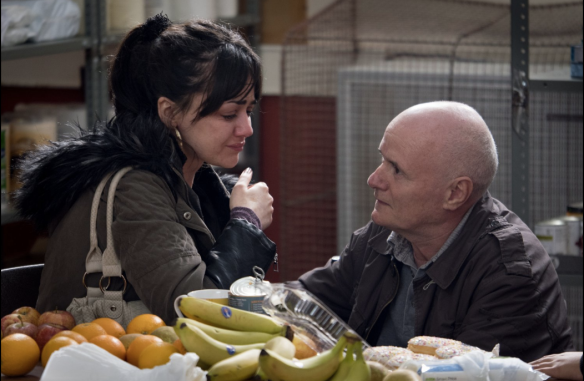 13. Hayley Squires- I, Daniel Blake- Hayley Squires is absolutely heartbreaking as Katie, the impoverished single mother struggling to feed her kids in contemporary Britain.  She and the movie’s protagonist, Daniel, are united in their frustration and despair at the hands of the state welfare system. They help each other out how and when they can, but the cogs of bureaucracy in Ken Loach’s film are unrelenting. Squires steals nearly every scene she’s in, from a trip to the food bank that ends with her desperately opening a can of food and shoveling it in her mouth or a powerful eulogy she reads at the end.

15. Jeff Bridges- Hell or High Water- Jeff Bridges was born to play characters like Marcus Hamilton, the world weary, soon-to-be-retired Texas Ranger who hunts a pair of sibling bank robbers in David Mackenzie’s Hell or High Water.  Bridges juts out his jaw and imbues the character with an appropriately syrupy drawl, and carries his body with a heaviness that makes each movement seem deliberate. Hamilton approaches the case like someone who knows he’s a step behind only because desperation or recklessness haven’t caught up with the criminals yet. His patience and caustic, calculated approach can seem like laziness, but it’s anything but.

Lucas Hedges- Manchester by the Sea

Note: Unfortunately, films like Elle and 20th Century Women did not open in Michigan before the end of the year and we were unable to see them.