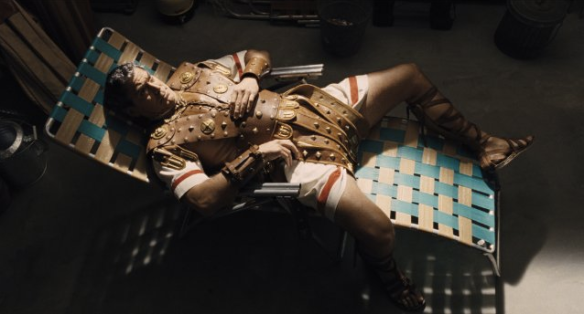 Hail, Caesar! — Joel and Ethan Coen’s Hail, Caesar! is a detective story set amid the extravagant musicals and melodramas of a ’50s Hollywood studio.  The “detective,” Eddie Mannix (Josh Brolin), is actually a fixer for Capitol Studios.  He’s out to find Baird Whitlock (George Clooney), the star of the studio’s latest epic (also titled Hail, Caesar!).  Whitlock is drugged and abducted from Capitol before his crucial closing monologue scene.  His location is just one of the many things on Mannix’s plate; he’s also balancing intrusive twin gossip columnists (both played by Tilda Swinton), an actor who can’t really act (a scene stealing Alden Ehrenreich) and an actress (Scarlett Johansson) who the studio wants to make marry for a third time so she doesn’t have a child out of wedlock and ruin her image.

The Coens stage Mannix’s search for Whitlock not as something urgent but as something that will likely sort itself out.  (Minor spoilers ahead) Whitlock’s abduction is an inside job staged by writers looking to stage a revolt in the studio to make more money.  In a lavish mansion overlooking the ocean, they explain to him how they’re using him to seize the means of production from the studio heads.  Whitlock later explains to Mannix that they taught him about Kapital (“with a K” he makes sure to add).

Hail, Caesar!’s script is as sharp as anything the Coens have done, but it also basks in the glories of old Hollywood productions.  Long stretches of the movie abandon the central plot altogether to revel in some fantastic set-pieces; these include a show-stopping tap-dance sequence in a sailor musical (led by the effortlessly charming Channing Tatum) and a synchronized swimming number for a mermaid film that is shot almost entirely from above.  In this way it reminded me of Paul Thomas Anderson’s recent film Inherent Vice, another recent detective story that conjures up a mood of mystery rather than focusing on the process of solving one.  Hail, Caesar! ends on a similar note as the Coens’ previous film Inside Llewyn Davis, leading right back to its beginning and suggesting that the protagonist is doomed to repeat the entire thing over again the next day.   Grade: B+ 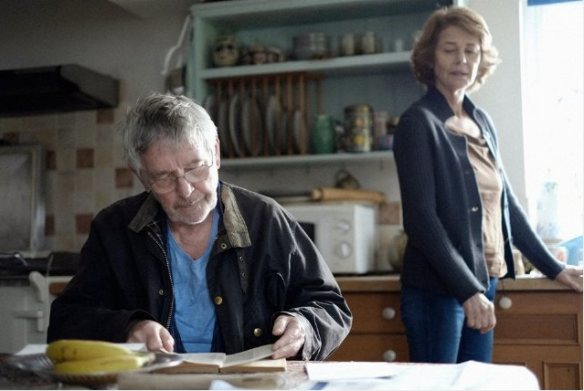 45 Years —  Kate and Geoff Mercer (Charlotte Rampling and Tom Courtenay, respectively) are about to celebrate their 45th wedding anniversary.  It’s an odd one to celebrate with such a lavish party, a man tells Kate. They were unable to celebrate their 40th because Geoff was having health issues, she says.  Geoff gets in the way of this one too, though for much different reasons.  In their first scene together, he receives a letter that the body of an old girlfriend who he dated back in the ’60s has been found frozen in ice in Switzerland.  Later he remarks how she must look the same and he looks “like this” (meaning older).

Moments like this gradually create a void between the Mercers in the week leading up to their anniversary party.  Geoff’s relationship with this woman from the past seems to be much more than he wants to let on, and Kate has known him long enough to see that he’s holding back.  Director Andrew Haigh, who wrote the screenplay based on a short story by David Constantine, plays much of the movie off Rampling’s face, which becomes consumed by doubt and distrust as Kate continues to plan for the party.  She and Courtenay are both exceptional here, illustrating a lifetime together even though 45 Years takes place over less than a week.  The Mercers’ home, where much of the movie is set, holds secrets Kate never thought to look for.  Because we are privy to almost everything she does, the movie finds tension in when Kate will confront Geoff, or if she will at all.  Haigh has created an intimate, devastating study of marriage as a series of small betrayals.  Grade: B

Anomalisa — Anomalisa is surprisingly stale, especially when placed alongside the other work of its writer and co-director, Charlie Kaufman.  What’s worse, he and co-director Duke Johnson’s use of stop-motion animation only amplifies the movie’s wholly unoriginal conceit instead of distracting from it.  Michael Stone (David Thewlis) is a hopelessly lonely middle-aged white man who is traveling to give a lecture about his best-selling customer service book.   At a hotel in Cincinnati, he meets Lisa (Jennifer Jason Leigh), a woman whose voice rattles him from the coma of his everyday life and seems to give him momentary joy and purpose.

Lisa is so distinct because every other character except David has the same face and the same voice (that of Tom Noonan).  She’s in town with a friend from work for David’s speech, and the two are ecstatic when he abruptly asks them to have a drink at the hotel’s bar.  As he continues to express more and more interest in her, she begins to get uncomfortable.  She’s embarrassed and a bit frightened to be so noticed.  Anomalisa suggests that the most remarkable thing about her is that David likes her, that she has a beautiful voice because David likes her.  A night of tender, euphoric sex changes her forever and is just a temporary oasis for him to escape the annoyance of his wife and young son.

Though there are three wonderful vocal performances here, I found this entire premise not only stale but insulting.  Anomalisa is Kaufman’s most serious-minded work yet, and even its few attempts at humor mostly fall flat (the toy store the cab driver told him about is a sex toy store!).  It feels like an unwelcome inverse of his other movies, which contain original, often surreal set-ups that co-exist with the everyday.  His latest, despite its polished and distinct use of stop-motion animation, is disarmingly and disappointingly simple. Grade: D+