Spotlight—  The only direct brush with evil in Spotlight comes in an offhanded exchange between reporter Sacha Pfeiffer (Rachel McAdams) and a priest who openly admits to molesting young boys.  He admits to it while standing casually in his doorway in the middle of the day.   He doesn’t seem to be thinking anything of it, like what he’s saying is perfectly fine. When his sister interrupts him and slams the door on Pfeiffer’s face, she walks down onto the sidewalk, where two children race by on bikes toward a school bus looming in the background.

Though their working space is cramped and flooded with blinding fluorescent lighting instead of windows, The Boston Globe newsroom is not hermetically sealed off from the world, and the story the paper’s “Spotlight” investigative team is uncovering impacts all of their personal lives.  The building where they work is across the street from a Catholic school where a priest was accused of molesting several boys, including a former classmate of Walter Robinson (Michael Keaton), the group’s leader.   Another member of the team, Matt Carroll (Brian d’Arcy James), lives right by a home that houses priests who are “rehabilitating.”  It’s a two-story white house, indistinct from any of the others in his neighborhood.  Knowing it’s there and that he can’t run through the streets warning people before the story is published keeps him up at night.

Spotlight hits hard precisely because it doesn’t go for the emotional jugular.  Aside from Pfeiffer’s aforementioned interview with the priest, the others largely appear only as names on a spreadsheet. The biggest confrontations in the movie are internal arguments about when to go to press.   More often than not we hear about people breaking down when discussing the abuse, and if we see it, the camera is kept at a distance so we can see how the reporters investigating it respond as well.  We see needle marks on a victim’s arm because reporter Mike Rezendes (Mark Ruffalo) notices it during an interview.

This is a movie about acknowledging a tremendous societal evil.  It’s an evil so entrenched in the fiber of Boston’s Catholic community that people have become used to ignoring it.  Even the reporters who slowly unravel the horror committed by clergy members could have acted on the news tips years ago.  Robinson says that much in a meeting right before the story drops.  It’s a moment that brutally undercuts the sense of accomplishment they should all be feeling after uncovering crucial documents that show the abuse was ignored.  The brilliant script, co-written by Josh Singer and director Tom McCarthy, finds a thrilling narrative thread in this massive story by focusing on guilt rather than professional triumph.  In Spotlight, evil is silence, and silence is systemic.  Grade: B+

It’s pretty clear that when these doomed words leave the mouth of CBS producer Mary Mapes (Cate Blanchett) less than a third into Truth, that they most certainly don’t.  The “it” is, or could have been, a history-making scoop, the final puzzle piece in a story about then-President George W. Bush’s questionable service record in the Texas Air National Guard.  Instead, the 60 Minutes story became an embarrassment, one that cost Mapes and CBS anchor Dan Rather (Robert Redford) their jobs. (She was fired, he stepped down).

Truth, written and directed by James Vanderbilt and adapted from Mapes’ book, is an often excruciating examination of professional failure in the public spotlight.  Mapes is made to writhe like an ant being burned with a magnifying glass much more so than Rather.  The movie attempts to reduce her relationship with Rather as that of father and troubled daughter, and brings in her actual, allegedly abusive father later when she’s at her lowest.  Though the story is brutal, the reductive portrayal of Mapes left a sour taste in my mouth, especially compared to the lionized version of Rather that Redford brings to the screen.  Blanchett delivers a layered performance despite the thin material. When Truth sticks to the story rather than trying to explain away her character with half-formed father issues, it is squirm-inducingly effective. Grade: C+ 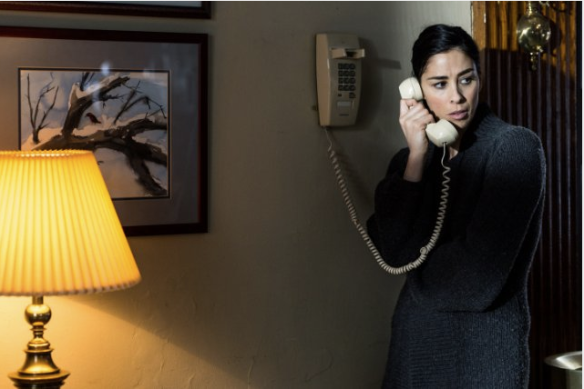 I Smile Back- Sarah Silverman gives a relentlessly dark performance in I Smile Back, but the movie can’t seem to decide what to do with it.  This might have been solved by a longer run-time (the movie is only an hour and twenty minutes), but as it stands it’s a character study that has no real interest in observing its main character.  Instead, it sprints to the finish, shoving her from scene to scene and rarely allowing her performance to connect.  Silverman plays  Laney, a woman plagued by drug and alcohol addiction, and the main arc of the narrative focuses on her implosion and attempt to get sober for herself and her family.  The movie works as well as it does because Silverman is able to balance the character’s conflicting desires of addiction, the insatiable need to consume and the burst of determination to get better.

The latter only lasts briefly, and it is Laney’s stint in rehab and her return home that give the movie its best moments.  The scene where she has a cake with her husband (a loving if frustrated Josh Charles) and two children is easily one of the most beautiful, then tragic scenes I’ve seen all year.  In it, Laney is frosting the cake with her happy-go-lucky daughter when she looks over at her older (but still very young) son.  He’s sitting to the side, distant and unhappy.  He’s developed nervous habits to cope with his budding anxiety.  In a brief series of cuts between Silverman and the young actor Skylar Gaertner, director Adam Salky shows a mother’s horrific realization that her fate might be her son’s too.  The rest of the movie, a series of Laney’s increasingly hopeless encounters with her husband and others, are well acted but not nearly as powerful.  Grade: C 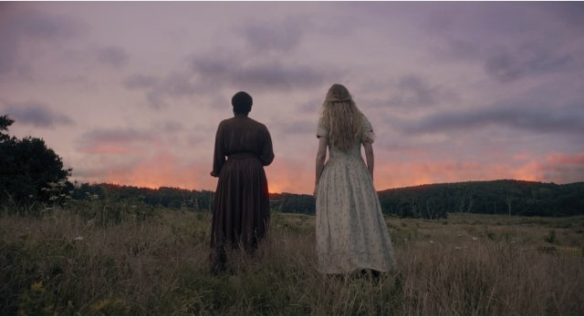 The Keeping Room — (Spoilers throughout) The Keeping Room is an incredibly tense and well-executed thriller set at the end of the Civil War.  Centered on two white sisters and a black slave maintaining a small farm while the men are at war, it is a brisk and ruthless examination of gendered and racialized violence. The movie’s key line happens early, when the younger sister Louise (Hailee Steinfeld) complains about having to work in the field alongside the slave Mad (Muna Otaru).  Her sister Augusta (Brit Marling) looks up from her work, wipes her forehead and replies “We all niggers now.”

Not long after Louise protests the field work, she’s bitten by a (presumably rabid) raccoon and needs medicine from town.  She smacks Mad for not watching her sister, and Mad smacks her back, harder.  “What are you going to do?” Mad’s eyes seem to be saying.  She knows she’s needed, and she’s right.  Augusta races off to get medicine from town, and encounters two drunk, violent white men (Sam Worthington and Kyle Soller), who eventually track her back to the farm.

Director Daniel Barber uses the tumultuous situation at the core of Julia Hart’s screenplay to craft a potent and unnerving film.  The men make no effort to hide their intentions.  They are there to rape the white women and then likely kill them all.  Mad is not considered by them to be a sexual object; one of the men beats her over the head to knock her out before raping Louise. In a crucial later scene, when the women are gathered around a table, safe for the time being, Mad recalls the horrific sexual abuse she suffered regularly as a slave.  It contextualizes the violence depicted against Augusta and Louise, who maintained the white supremacist patriarchal system that fostered that abuse while the men in their family went off to fight for it.  The world of The Keeping Room is a world on fire in almost every sense, and its most potent images echo that– Augusta ripping the shirt off her back to fan flames, or women staring at the sky over the trees as it glows orange as the war inches closer.  Will the potentially hundreds of soldiers who are coming be just the like these other two?  Louise and Augusta begin the movie clinging to ritual, and they end it with Mad, running for their lives.  Grade: B+