Straight Outta Compton – F. Gary Gray’s N.W.A. biopic is an occasionally thrilling chronicle of the rise of the West Coast hip hop group that sadly devolves into brand management.  That’s to be expected when the film’s producers, Dr. Dre and Ice Cube, are also two of its subjects.  Straight Outta Compton is a wonderful showcase for its three core actors (Corey Hawkins as Dre, O’Shea Jackson Jr. as his father Ice Cube and especially Jason Mitchell as Eazy-E), but it could have been so much more.

Compton’s focus on police brutality is incredibly relevant, and the early scenes where the artists are subjected to violent, unwarranted stops by law enforcement are among its most powerful.  N.W.A.’s concert in Detroit, where they perform “Fuck tha Police” after being intimidated by officers before taking the stage, is filmed with undeniable urgency and energy, as is the follow-up where undercover officers charge the stage and arrest the group.

Like the other concert performance scenes, the energy of the crowd is contagious, and the movie’s biggest shortcoming is in its failure to address the female half of those excited crowds. N.W.A.’s misogyny is largely unconfronted, as is Dr. Dre’s abusive history with women.  This  has already been written about at length by people with more authority on the subject than me, but the watered down history of the movie’s second half is noticeable and hurts it.  Gray’s direction is beautiful and powerful in equal measure, and the sweeping images of ’80s and ’90s Compton — dirt bikes cruising down the street in the sunset, decked-out old cars bumping to music in the neon-colored streets, gangs uniting against police violence.  I can’t help but think there was more to tell here, though; that an unrestrained history, or even a 5-hour miniseries, would have done the story more justice.  Grade: C+

The Gift– Actor Joel Edgerton makes an astonishing feature directorial debut in this taut, chilling revenge thriller.  Edgerton’s biggest strength here is utilizing his supremely gifted (and well-casted) ensemble, which includes Jason Bateman, Rebecca Hall and himself.  Hall in particular gives an incredible performance as Robyn, one half of a married couple whose happiness is besieged by an old friend from her husband’s high school days.  As the layers are peeled back, it becomes clear that Gordo (Edgerton) is bringing up old wounds and hidden secrets more than directly trying to harm them.

As Robyn’s husband, Bateman gives a strong dramatic turn that takes on much darker tones.  The Gift‘s is a rare wide release that doesn’t talk down to its audience, and has the confidence not to offer up a true hero worth rooting for.  Though Robyn is far and away the easiest to sympathize with, her character is also flawed, if not to the same demented degree as her husband and Gordo.   To give away The Gift’s many sublime twists would be to ruin it.  This is not a gory stalker film as much as it is a psychological thriller that hones in on the unexpected twists and turns of marriage.  Comparisons I’ve heard to Roman Polanski films are apt and deserved, including the movie’s bone-chilling ending. Grade: B

The Tribe — A fascinating formal conceit is wasted on stale, pointless miserabalism in Miroslave Slaboshpitsky’s The Tribe.  Set almost entirely within the eerie halls of a Ukrainian school for the deaf, the movie contains no substantial spoken dialogue, no subtitles and no music.  Unless you are fluent in Ukrainian sign language, you will have to infer plot development through gestures and emotions.  Slaboshpitsky even takes the concept a step further by keeping the camera at a remove and letting each scene unfold within a single take.

The Tribe centers on a male teenage student (none of the characters are named) who is initiated into a gang that terrorizes the school and runs a prostitution ring on the side.  Other than a couple of scenes toward the beginning and one toward the end, very little of The Tribe actually focuses on the classroom experience.  Instead, Slaboshpitsky makes the dire error of inserting almost every horrendous on-screen terror imaginable, and for very little purpose.  In the last half, there is an abortion, followed by a rape, followed by four brutal head-bashing murders.  It mistakes grit for substance.  Grade: C-

The Man From U.N.C.L.E. – The Man From U.N.C.L.E. is a hyper-stylized Cold War spy movie based on a T.V. show I’d never heard of, directed by a man whose other movies I don’t really care for.  The movie makes the grave mistake of not being any fun at all, and Guy Ritchie’s sleek rendering of the ’60s pops with style and an exuberant, tropical color palette, but not life.  This is largely due to the stilted casting of Henry Cavill and Armie Hammer, who have almost no chemistry together, let alone with the supporting cast.  Cavill injects what little charm the material allows, but Hammer delivers a trapped and uninterested entry in the Bad Russian Accent Hall of Fame.

The two actors play spies on opposite sides who are forced to team up to stop an evil organization from using a nuke to disturb the already fragile peace.  U.N.C.L.E. moves along at a brisk pace, but in entirely predictable directions.  There aren’t enough fresh or exciting things going on to really warrant this movie’s existence. Grade: D 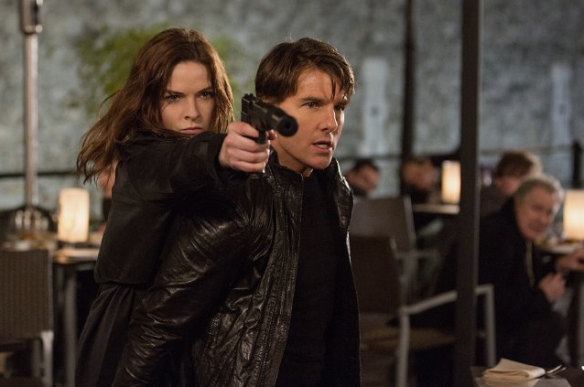 Mission: Impossible- Rogue Nation- If The Man From U.N.C.L.E. taught me anything, it’s that I take Tom Cruise’s action hero charisma for granted.  His fifth (!) outing as secret agent Ethan Hunt is as raucously entertaining as he’s ever been, in no small part due to the numerous times the movie allows him to stop before another jaw-dropping action set piece, honing in on his twinkling eyes and his “Yes, I’ve still got it” smirk.

Rogue Nation is easily one of the most fun experiences I’ve had at the movies this year, outside of Mad Max: Fury Road and Magic Mike XXL.  It’s a supremely polished big studio entertainment absent the self-seriousness and half-baked plot obsession that plagues the other super hero and dinosaur fare I’ve watched recently. (Side note: I haven’t watched Ant-Man).

Whether Hunt is getting in a knife fight above an opera audience, winding through cliffs on a motorcycle or diving into a watery abyss to clear the way for a nervous colleague’s land infiltration, director Christopher McQuarrie paces it all with contagious energy.  Yes, it’s Cruise’s show, but the movie also makes way for Ilsa Frost, an excellent female agent counterpart played by Rebecca Ferguson.  If memory serves, the badass British undercover agent saves Hunt’s life at least twice during the movie and never really needs saving in return.  Their collaboration to stop yet another sinister, world conquering plot (this one involves terrorists who are targeting Hunt directly as well as secret bank accounts to secure funding) is thrilling because it doesn’t overplay its hand. Grade: B

The Stanford Prison Experiment – The infamous Stanford Prison Experiment is lifted from the basic outline of Psych 101 textbooks and jolted to disturbingly intimate life in the hands of director Kyle Patrick Alvarez.  Before this movie, I only knew the basic framework of Philip Zimbardo’s controversial guard/prisoner social experiment.  He took a group of 24 mostly white men, locked half of them up in the basement of a Stanford University hall during the summer, and tasked the other half with guarding them in alternating shifts.

Zimbardo’s experiment was supposed to last 14 days but was cut off after only six because of the horrifying results.  Alvarez recreates the grainy, diluted footage from the 1971 power play with startling urgency.  The seeming straightforwardness of his movie may be off-putting to those who are more familiar with the experiment, but I found it to be an irresistible examination of straight male arrogance and privilege, especially its focus on how the guards seem to be taking behavioral cues from cops they’ve seen in movies. They’re framed comically at first, shot as tiny little men in cheap uniforms with gigantic nightsticks, but things escalate fairly quickly as they strip each inmate down and emasculate them in increasingly bizarre ways.  Zimbardo (played here by Billy Crudup), calls off the experiment after watching one of the guards force the inmates to simulate gay sex.  The buckets full of shit and the guards’ broken agreements to not use physical violence were not enough, apparently.

The Stanford Prison Experiment falls victim to the similar if less disruptive image maintenance that plagues Straight Outta Compton (Zimbardo acted as a consultant on this movie).  Instead of ending it on the horrifying if more resonant scene where the doctor confronts his monster, Alvarez includes a few useless scenes at the end explaining the aftermath of the experiment and what everyone learned.  He should have let his audience decide what they learned for themselves.  Grade: B-