There are two sequences in Prince Avalanche, the new David Gordon Green film, that are among the best the director has ever done. The first is a quiet moment near the beginning of the film between Alvin (Paul Rudd), a highway worker that is re-doing the roads after a vicious fire, and an older woman that he finds searching among the ash and rubble. The woman explains to him that the fire destroyed her home, and she is looking for her paper pilot license that was lost in the burning. Alvin quietly suggests that the license may have burned away in the flames, and the woman looks at him with utter devastation. It is an extraordinarily moving, semi-improvised scene that finds the director returning to the warmth and poetry that characterized his early work.

The second sequence is a drunken montage concerning Alvin and Lance (Emile Hirsch), Alvin’s work partner and the brother of his girlfriend. The two begin taking shots together and are soon trashing their work site and throwing their supplies in joyous, drunken abandon. The montage is set to Explosions in the Sky, a group known for their grand bursts of emotion, and the song builds to a jovial climax over the chaotic imagery. These scenes co-existing in the same film, both masterful in their own right, is sort of why Prince Avalanche doesn’t really work. It is also what makes the film a fascinating experiment, bridging the major gap between the bromantic world of Pineapple Express and the tender honesty of George Washington.

The plot, loosely adapted from the 2011 Icelandic film Either Way, is essentially a character study on these two road workers as they re-model the streets. Lance is obsessed with getting laid (of course!), and he talks openly about his sexual frustration while at work. Alvin, on the other hand, frequently sends letters to Lance’s sister, persistently trying to keep their relationship steady. The performances here are charming enough, but the characters rarely move beyond their sketched-out archetypes—Lance is the slightly clueless, yet sincere, counterpart to the more levelheaded and serious Alvin. It is a classic odd couple, but it’s also something that we’ve seen before many times (often in Green’s own work). 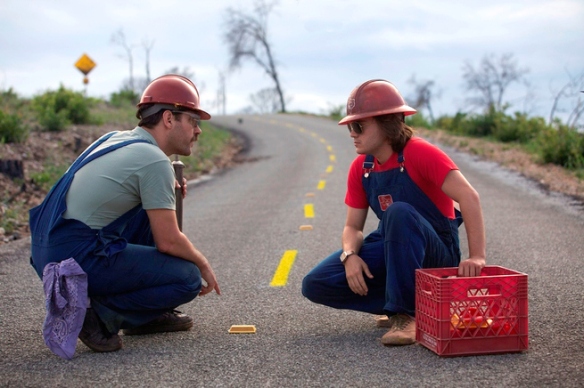 This wouldn’t be a big problem if there was simply a better film here. Much of the beauty that came so naturally in George Washington all feels a bit forced. The film was shot in the breathtaking countryside of Texas, and the cinematography from Green’s frequent collaborator Tim Orr looks fantastic, especially considering the film’s remarkable $60,000 budget. But the shots of nature, of a caterpillar crawling across a log to a skunk eating a turtle (seriously), all feel quite out of place when stuck between conversations of fingering a girl at a weekend party and Alvin farting. What remains is a weird pull-and-tug between vulgarity and naturalism, and it might have been a bit too much for Green to pull off.

What we have here, instead, is an enjoyable, if very slight, film from a talent who needs to find his voice again. It has been compared to Waiting for Godot and, indeed, the film contains a hefty amount of humor and surrealism, including a weird, recurring truck driver character. The difference, though, is that Green is unwilling to breach standard comedy and aim for something larger, and so we’re left with a film that feels a bit undercooked.