1.  Do the Right Thing- One of the angriest and most honest American films ever made, Spike Lee’s masterpiece chronicles “the hottest day of the year” in a Brooklyn neighborhood, and is the finest movie of the ’80s.  The summer heat only adds to simmering racial tensions, and by the time Mookie (Lee) throws that infamous trashcan through the window of Sal’s Pizzeria the sun has already set and it has been cooling off  for a while.  The self-contained world of Do the Right Thing is a theatrical microcosm of American society; a pot where nobody wants to melt and a country where compromise is never a real solution. 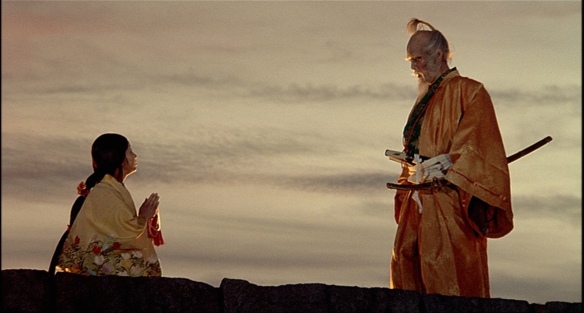 2.  Ran- Akira Kurosawa’s epic retelling of King Lear is arguably cinema’s lushest and most powerful Shakespearean adaptation.  Set in medieval Japan with all its lavish costumes and swordplay, it tells the story of an aging warlord who turns his kingdom over to his three sons, who tear it and their family apart and drive their father mad.  Ran is perhaps the greatest film from one of the greatest directors of all time, a screen epic fueled by rage, greed and broken honor.

3. Raging Bull- This punishing, homoerotic boxing movie from Martin Scorsese is surely one of the best sports movies of all time.  Robert De Niro gives one of his greatest performances (the other is in Scorsese’s Taxi Driver) as self-destructive boxer Jack La Motta, a ferocious man whose aggression does nothing but destroy and alienate him once he steps outside the ring.

4. Fanny and Alexander- Ingmar Bergman’s lushest and grandest film, Fanny and Alexander is also one of the truest and most heartrending movies about adolescent angst.  The two children of the title are caught in the midst of family struggles as their mother remarries a cruel and domineering new father figure.  This is one of the most visually rich movies in any decade, matching the emotional richness of the story blow for blow.

5. Blow Out- Calling Brian De Palma a Hitchcock wannabe is your right, but you would miss out on this grimy, provocative thriller in the process.  De Palma makes his work in Scarface look like child’s play in this movie about a man who records audio of an assassination disguised as a car accident that becomes a vast political conspiracy.  The technical sophistication of Jack (a never-better John Travolta) and his sound editing equipment leads him on a rich, devastating cinematic journey while simultaneously paying tribute to the tools of the trade.

6. Brazil- A deeply cynical comi-tragedy, Terry Gilliam’s Brazil is a bureaucratic nightmare set in a somewhat Orwellian near-future.  It is a story of an everyman (Jonathan Pryce) who has no desire to succeed or stand out being brought down by an error in paperwork that ultimately leads to his demise.  Gilliam envelops us in the layered, extraordinary world here without losing sight of his Monty Python roots.  By the end, though, the only laughter will be howls of madness.

7. The Shining- Speaking of madness, Stanley Kubrick’s disturbing deconstruction of the American family has driven plenty of viewers mad trying to figure it out.  One man was so fascinated/insane, he made a documentary about what the hell is going on in this movie.  On the surface, it is about a father (Jack Nicholson) who goes crazy while being winter undertaker at a snowed-in hotel in Colorado and tries to kill his family (Shelly Duvall and Danny Lloyd).  Kubrick’s menacing tone and impeccable sense of claustrophobia turn this into one of the most visually-stunning horror movies ever made.

8. Broadcast News- James L. Brooks’ news indictment is the finest screen comedy of the decade, as heartwarming as it is bitter.  Holly Hunter, Albert Brooks and William Hurt are all outstanding as a trio of workers at a broadcasting station undergoing massive moral shifts.  Amid those changes are also romantic entanglements, but the best thing about Broadcast News is that it manages to mellow out love triangle drama in favor of saying something poignant (and still relevant) about the watering down of on-air news.

9. The Last Temptation of Christ– Certainly the most controversial film of the decade and maybe of all time, Scorsese’s The Last Temptation of Christ is also one of the most misunderstood.  None of the people spewing bomb and death threats seemed to notice how deeply spiritual this film was.  In adapting Nikos Kazantzakis’ novel about Jesus (Willem Dafoe) being tempted into coming down off the cross and living a normal life, Scorsese created an intimate epic that is one of the most beautiful films he’s ever made.

10. Hannah and Her Sisters- Woody Allen’s greatest achievement of the decade is in this stunning, hilarious story of bourgeois indecision.  Romance may drive the story, but at its heart is the strained relationship of three sisters (Mia Farrow, Dianne Wiest and Barbara Hershey).  Allen’s narrative and comic timing has never been better than in this film, which is a perfect blend of pathos and zingers.

11. Blue Velvet- David Lynch sets one of his earlier nightmares amid the brightly polished facades of suburban life.  This is a a murder mystery where the filth and corruption have no limit, where convention and good will disguises torture and murder. Excellent, dark performances from Dennis Hopper and Isabella Rossellini aid Lynch’s surreal vibe.

12. Star Wars: The Empire Strikes Back– Empire is the strongest film in the Star Wars saga because, like many middle trilogy entries, it uses an excellent first installment to enrich the characters and raise the stakes instead of being a lazy redo.  From the epic invasion of Hoth to cat-and-mouse chases through the galaxy that end on a city built on clouds and of course the wise debut of Yoda, the limitless expanses of this universe continue to broaden moviegoers’ horizons.

13. Blood Simple- This sinister neo-noir announced the arrival of The Coen Brothers, but after almost 20 films it still stands among their best.  In the vain of classic noir stories like The Postman Always Rings Twice, Blood Simple tells the story of infidelity and revenge.  The difference, though, is that Coens stress detail over story; the smearing of blood at a crime scene that would normally be clean, or the way gun shots penetrate a metal door with light protruding.

14. The Purple Rose of Cairo- A man (Jeff Daniels) walks off of the movie screen and into the theater and falls in love with a bored, emotionally abused woman (Mia Farrow) in one of Woody Allen’s warmest, most surreal features.  Purple Rose of Cairo recreates Depression-era New Jersey as movie pastiche, but uses it as a backdrop to tell an alarmingly resonant story of fantasy as an escape, something Allen would return to in Midnight in Paris.

15. Videodrome- David Cronenberg’s disgusting vision of torture-as-entertainment has no less relevance in the age of Saw and Hostel.  When TV executive Max Renn discovers a secret broadcast of brutal beatings and sexual violence, he becomes hypnotized and enthralled by it.  Eventually it takes control of his body, and uses him as a pawn to kill public officials.  It explores Cronenberg’s classic theme of technology fusing with the body, and though the effects are somewhat dated, it is still a disturbing and resonant vision.

16. Full Metal Jacket- The haunting boot camp scenes in the first half of Stanley Kubrick’s Vietnam War flick stands with the best of his work.  As a whole the movie is also a stunning portrayal of trauma that results from being turned into a killing machine.

17. The Times of Harvey Milk– A stunning work of docu-advocacy, Rob Epstein’s The Times of Harvey Milk gave us the San Francisco gay scene in the midst of creating itself as well as a portrait of the landmark politician who helped get it there.  From his amazing rise to San Francisco’s Board of Supervisors to his brutal assassination at the hands of fellow board member Dan White, Harvey Milk had a life worth talking about back then and, as Gus Van Sant proved, he has a life that is still worth talking about today.

18. Ferris Bueller’s Day Off- This is the best film from one of the most iconic and influential teen comedy writers and directors of all time.  Though the references and the fashion of John Hughes’ films may be dated, the undeniable truths of being angsty white teens resonates and appeals to people of all ages to this day.

19. Lost In America- Albert Brooks’ comedy is just as self-deprecating as that of Woody Allen, but it may be even more hopeless and cynical.  Lost in America is one of the funniest movies from the ’80s about the disintegration of the American Dream, and cemented Brooks as an auteur and not just a comedy writer and actor.

20. Raising Arizona- A whiplash-inducing slapstick comedy that is strictly non-traditional, Raising Arizona was the second Coen directorial effort of the decade (I’m sure they’d appreciate it if we forgot about Crimewave).  It shows off their “other,” funnier side, where swift pacing and grandiose absurdity mesh together like an ex-cop and an ex-convict (which is pretty well, actually). 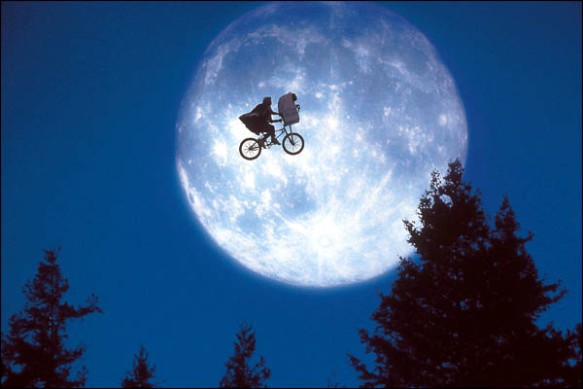 21. E.T. the Extraterrestrial-  Steven Spielberg’s story of adolescence and aliens is by far one of the most iconic movies of the ’80s.  It’s more than just populist drivel like Top Gun, though, telling an intimate story driven by emotions just as much as the robotic marvel at its center.

22. Amadeus- Milos Forman’s adaptation of Peter Shaffer’s play (he also wrote the script) about Mozart and his rival is a glamorous but deeply human tribute to genius in all its odd, painful glory. 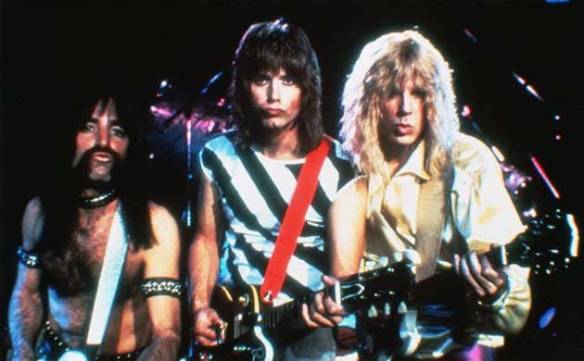 23. This Is Spinal Tap- You can thank Christopher Guest and his unstoppably funny ensemble for modern mockumentary shows like The Office and Parks and Recreation.  This hilarious send-up of rock star ego started an unshakable modern trend but can still stand on its own as more than just an influence.

24. The Last Metro- Francois Truffant’s World War II story of an actress hiding her Jewish husband in his own theater pairs the directing titan with two of France’s indisputable acting legends: Gérard Depardieu and Catherine Denueve.  It tells a wildly suspenseful story of art prevailing in the face of atrocity, as a Jewish theater owner must take refuge in his workplace while having the chief actress manage things up front.

25. The Breakfast Club- Though Ferris Bueler will always be a better movie, The Breakfast Club may be John Hughes’ most personal and hardest-hitting one, if you can even call it that.  Telling the story of five wildly different high schoolers who bond at Saturday detention, it is an endlessly quotable and almost universal story about American teen problems and their lack of resolution.