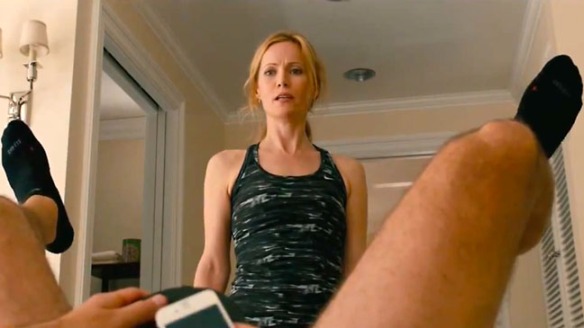 Paul Rudd is the only main character in Judd Apatow’s latest movie who isn’t part of the comedy auteur’s actual nuclear family.  The wife (Leslie Mann) and two children (Maude and Iris Apatow) are basically playing out better-written scenarios of their lives with a cuter dad.

This makes everything about This Is 40 feel both a little weirder and a little more alive; it’s like making your family relive an awkward Christmas on camera.  Apatow is a keen observer of white upper middle class life, though his considerable success as writer, director and producer over the past few years has made his class standing considerably higher than that.  This movie is his best since his other movie with 40 in the title, albeit much more pensive and mature.

Don’t confuse This Is 40 with Apatow’s previous, far less successful “serious” effort, Funny People.  That movie had the abrupt tonal inconsistencies of a Tyler Perry movie, while This Is 40 is his most controlled, consistent and formally advanced feature yet.  It is chock full of charm as well as fart and vagina jokes, but it all blends together fairly seamlessly.  There are moments of improvised comedic genius (mostly featuring Melissa McCarthy) but it’s the moments of sincere warmth, like Pete (Rudd) and Debbie’s (Mann) marijuana-fueled getaway to Laguna Beach that stick.

Thanks to the two great, honest performances at its center, this scene in Laguna is the best Apatow has ever directed.  His choice to cast his own family has always had mixed results, though this shows more with his children as they age with each new movie.  Maude Apatow, now a teenager, is reduced mostly to yelling, whining and complaining about Apple gadgets, and her overacting, through no fault of her own, draws the movie back considerably at parts.  Iris, for whatever reason, is a much more natural and persuasive screen presence, just like her mom.  The rest of the cast, full of both Apatow veterans and Megan Fox, fill in the edges of the family dynamic nicely.

Pete and Debbie’s dads, played respectively by Albert Brooks and John Lithgow, are polar opposites who damaged their kids either by being there too much or not at all. This is largely the problem that their children have with each other.  Much of This Is 40 hinges on that dreaded milestone of an age.  Debbie wants to make sweeping changes to improve life and make them “happy,” while Pete struggles to keep his small record label afloat.  More than any of his other films, Apatow gives female concerns a fair shake and not just making them a fun-sucker for the man-child.

Pete is already a grown-up, and isn’t being dragged into it by a female agent of maturity.  Both he and Debbie nag at and charm each other, as they showed in Knocked Up.  While in the forefront here, they navigate the trials and tribulations of marriage and a bad economy in a more realistic, still occasionally hilarious environment.

In a recent interview Apatow gave to Film Comment, he talked about how he strived for the visual tone of Alexander Payne’s films by enlisting his director of photography Phedon Papamichael.  It’s noticeable in the ease of movement and sense of place the movie has; for the first time one of his movies has considerable visual life and the California setting feels almost like a character.

Part of Apatow’s skill has always been that he knows who to turn to get the results that he wants.  He has a small circle of actors from his Freaks and Geeks days, but he also gives screentime to exceptional talents like Melissa McCarthy and Albert Brooks.  His collaborative, heavily improvisational process makes his characters expand beyond the script and allows them to come more alive, even if the movie runs a bit long.  With This Is 40, he achieves a maturity that most of his on-screen stand-ins would run far, far away from.