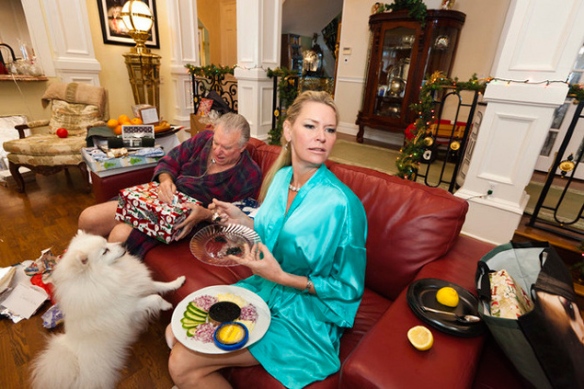 Lauren Greenfield’s documentary The Queen of Versailles has images that perfectly define post-2008 recession America.  In the wake of the massive layoffs of most of their maid staff, the once impossibly rich Siegel family live in an immaculate 26,000 square foot mansion littered with old food plates, dozens of misplaced toys and covered in dog shit.

Documentaries like this are a product not just of skillful filmmaking and probing insight, but also luck.  Greenfield started filming two years before the financial meltdown that nearly crumbles David Siegel’s time share empire, Westgate Estates.  Him, his wife Jackie, their eight children (seven of which they made and one who is a niece they took in) and their pets were preparing to move into what would’ve been the biggest home in America.

This 90,000 square foot palace, modeled after the famous one in Versailles, sits unfinished atop an Orlando hill for most of the movie.  It is a prized jewel in the beginning and then by the end, an unattainable treasure.  The Siegel’s lose most of their fortune when the real estate bubble bursts, laying off thousands of workers in the process.

Though David is the breadwinner, Jackie is much of the movie’s focus.  A former beauty queen with a degree in engineering, she hails from working class roots and claims she married her husband out of love.  Their financial woes reveal not only the delusional American mindset that contributed to the crisis on a massive scale, but also the reevaluation of their life together.  She talks about having so many kids because she thought there would always be maids around to take care of them; he talks about considering her another child when it comes to money.

Greenfield interviews those maids as well, Philippian immigrants who, once many of their co-workers are laid off, work around the clock to clean, cook and coddle as best they can.  Jackie never really became a sympathetic character for me, because though she appears embarrassed and exhausted in the midst of the crisis, she is stubborn and arrogant and remains entitled and deliberately blind to what is happening.

Of course these are the virtues that the couple wielded so well when they were still sealed inside their bubble of excess, with its private jets, shopping sprees and elegant dinner parties.  David boasts in the beginning third of the movie that he did things that were “probably illegal” to single-handedly get George W. Bush reelected president.  Greenfield sneaks a clip of the then-president explaining the woes of the collapsing economy, one of the few times she appears, ever so slightly, to nudge us toward openly ridiculing these former one percenters.

Most of the movie is a standard mix of interviews and observation, though.  The Siegels lived the American Dream on a colossal scale, and they experience the financial meltdown in much the same way.  The movie traces how they redefine everything about their lives- their expenses, their business, their marriage- while illustrating their obsessive fixation on retaining their social image.

In a key moment, Jackie returns to her hometown to visit family, giving an embarrassed smile to the camera as she asks her kids what it was like to “fly commercial” and facing further humiliation when a Hertz clerk explains to her that her car doesn’t come with a driver.  It is here that Greenfield shows Jackie’s humiliation not mockingly but more pathetically.  The Queen of Versailles is not about wallowing in the pity of the filthy rich, or on how they rotate between blaming the banks and shaming each other.  It is about using their situation to illustrate the entire mindset behind the meltdown, and creating a cautionary tale that is relentlessly bleak and unforgiving.

1 thought on “REVIEW: The Queen of Versailles”