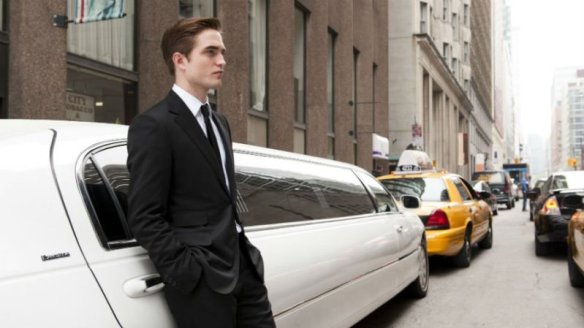 All this modern billionaire ever wanted was a haircut, though in Cosmopolis it becomes quite clear that he pretty much has everything else a person could desire.  David Cronenberg brings his typical visual menace to this deeply intellectual examination of the one percent, staging what amounts to little more than a series of conversations as increasingly intense verbal battles.

When Eric (Robert Pattinson) untints the windows of his hyper-modern limousine, we see an outside world that is coming closer and closer to collapse.  He of course is numb to everything but his own concerns, a simple haircut used to exaggerate how miniscule they are in relation to everything else.  As he talks (and talks and talks) to his girlfriend, his prostitute, his financial adviser and a myriad of others, it becomes clear that there is a pent-up frustration that is slowly being unraveled as the economy and his fortune near demise.

Cosmopolis is drawn from a novel by Don DeLillo, but it fits comfortably in with much of Cronenberg’s catalog.  The heightened sense of place echoes the seemingly modern world of films like Videodrome or A History of Violence. Though they don’t actually exist, they are imminently recognizable as a critique of America because of how they are exaggerated. 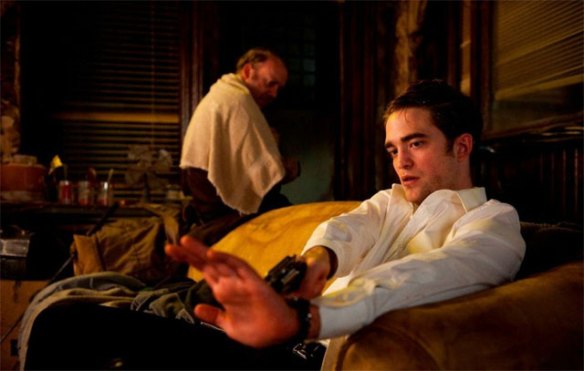 In last year’s A Dangerous Method, Cronenberg did quite a bit of self-analysis in chronicling the story of an infamous feud between Freud and Jung.  Here he is more back to form, with plenty of token Freudian symbolism thrown in for shits and giggles.  It is ultimately a much weaker film if still filled to the brim with as much menace and intellectualism.

Much of the movie’s lacking comes from Pattinson’s uneven performance.  He is almost too numb at the onset, though he eventually grows into it.  Much of Cosmopolis‘ ability to engage comes from whoever he happens to be conversing with.  There are the greats (Juliette Binoche and Paul Giamatti), the goods (Samantha Morton and Mathieu Amalric) and the completely forgettables (everyone else).

Unlike On the Road, the plentiful big and semi-big names never feel like celebrity cameos.  Taking us through Eric’s chaotic downward spiral means leaving a trail of people behind as his limo inches closer and closer to the barbershop.  It is intentionally a one-on-one affair when it comes to much of the story.  Cronenberg has a keen sense of how to let all those conversations breath within a scene, so the movie rarely feels stifled in a bad way.  He can create a sense of claustrophobia at will, and his command of mood ultimately saves the movie.

Paranoia continues to mount as the movie moves steadily along with few bursts of the intensity hinted at in the trailer.  The serenity inside Eric’s limo as the world goes to hell outside is a perfect visual encapsulation of all those headlines about the apathy of America’s rich.  As Eric continues to ponder while simultaneously go insane, he becomes that outside world.  The final scene between him and Paul Giamatti’s enraged outsider is masterful.  The rest of the movie tries too hard, though it is still quite engaging.