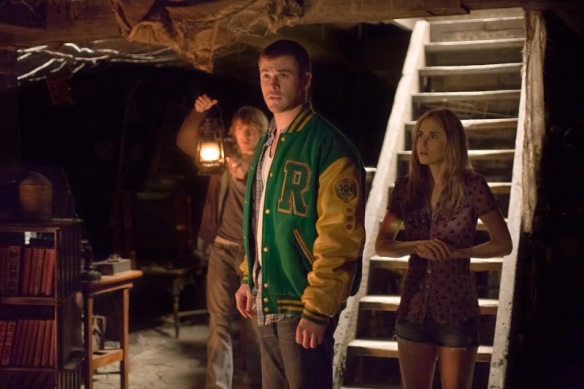 Slasher films are just realistic slapstick with uglier, less funny comedians.  Whack someone over the head, and if they don’t bleed it’s funny; if they do, it’s terrifying.  Since Wes Craven clued teenagers in on the gruesome joke in Scream, countless conceptual spin-offs (many made by Craven in increasingly meta sequels) have emerged from the over-done ashes of a seemingly dead genre.

Cabin in the Woods takes meta horror one step further, first by taking the dead teenager scenario, spinning it on its head and then almost taking the spin-off seriously.  When it works, and it often does, it’s an innovative in-joke that makes the audience feel smart even if it is rather simple.  Five slasher stereotypes- the jock, the brains, the whore, the moron the virgin- venture to the cabin of the title for a vacation away from technology.  They are warned away from doing it by an ominous gas station attendee, but of course decide to go.  Then, they are subsequently slaughtered one by one.

There’s more to it than that, though if you haven’t seen the movie I’ll caution you to stop reading here.  What co-writers Joss Whedon and Drew Goddard do is make everything about the cabin and the premise fixed.  Underneath there is a vast network of engineers and scientists who control the surrounding environment and use chemicals to control the teenagers’ moods and push them toward the desired outcome.  That outcome is to have everyone but the virgin die so that some ancient gods don’t return and destroy civilization.

The blood sacrifice allows Goddard (also the director) and Whedon to have their cake and eat it too.  Cabin in the Woods’ best sequences are the ones below the surface, where the architects steer the teenagers toward bloody conclusions.  It helps that the two main overseers are played by Richard Jenkins and Bradley Whitford, whose verbal sparring and nonchalant manner add some bloodless humor to the proceedings.  Had the movie done away with the added ritualistic subplot and made these scientists more sinister, it may have been almost revelatory. 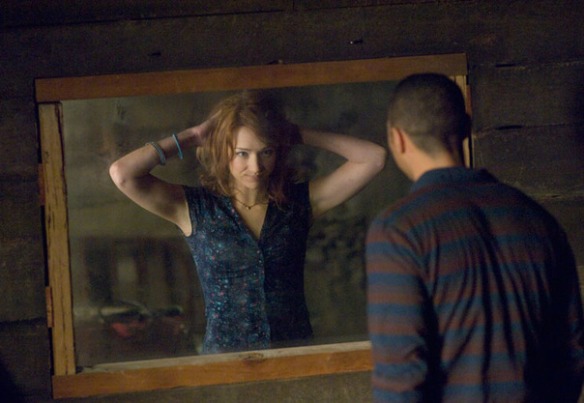 What’s there is good enough, though, save for a few annoyingly choreographed chase sequences and some characters you are more than happy to see slaughtered (Fran Kranz’s pot-headed Marty being by far the worst).  Whedon and Goddard pepper plenty of gags about how predictable the whole affair is, acknowledging the formula of a slasher movie by making much of what happens to the teenagers simply the people below the surface filling in Mad Libs. If the budget had allowed for some better CGI, the rampaging creatures later in the movie would’ve been far more impressive, though they were still quite entertaining.

At the heart of Cabin in the Woods is the idea of violence as mass entertainment, no matter how hard it tries to avoid it by throwing on the meta layers and the subplots.  There is a scene where the architects celebrate their victory with booze and drunken chatter while a teenager is being bloodied before them on several big screen monitors.  That’s where the movie should’ve ended, but it kept digging through the rabbit hole in a curious attempt to render itself obsolete.  Thankfully, there’s enough in the movie to keep that from totally happening.