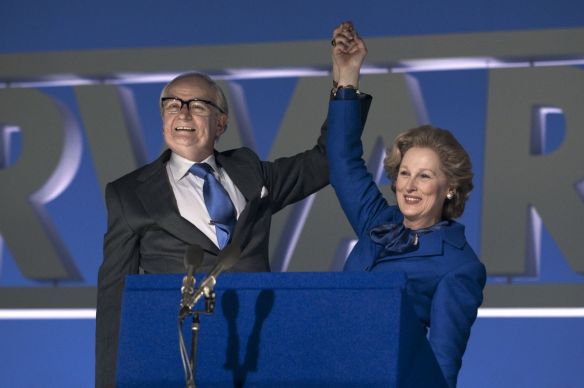 It’s no surprise at all that Meryl Streep’s portrayal of Margaret Thatcher is amazingly conceived and executed, worthy of any acting trophy that exists.  Everything from the posture to the voice and especially those trademark darting eyes are in full force in a movie that unfortunately fails to capture the true gravity of its subject.

Phyllida Lloyd, whose credentials include the much-maligned screen adaptation of Mamma Mia!, brings a typical biopic aesthetic to The Iron Lady.  Every character fits in its appropriate place and blends in with the environment unless they aren’t supposed to.  Abi Morgan’s screenplay, the biggest thing to blame for this film’s mediocrity, often extenuates Thatcher’s struggle to be taken seriously as a female politician.  Everything else is glossed over.

The Iron Lady is told through Thatcher’s elderly, dementia-ridden perspective as she looks back on her life.  Many of the best scenes occur in this time period, where Lloyd films the proud woman often cloaked in shadow, unsure if her husband Denis (Jim Broadbent) is actually talking to her or just an illusion of her fading mind.  Broadbent and Streep’s chemistry in these scenes is extraordinary, as is Lloyd’s ability to create a convincing scene and then let the two actors run away with it. 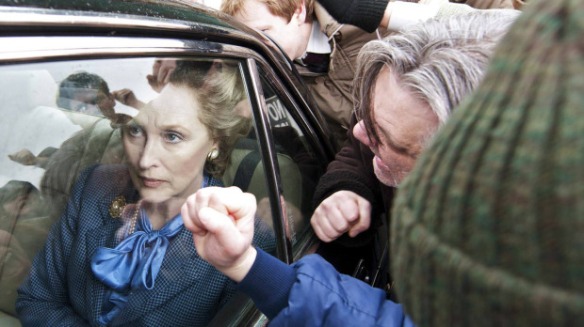 As with most biopics, this is more about the acting than the idealism behind the subject.  If ever there was a movie that needed some sense of idealism or even a statement, though, it was a movie about Margaret Thatcher.  There are news briefs and archival footage that show just how divisive she was- an entrepreneurial hero to some, a poor-hating villain to others- but it says these things more than it shows them.  Streep’s eyes do most of the storytelling in this film, appearing haunted in her elderly years and full of ambition and cunning during Thatcher’s unprecedented 11.5-year reign as Prime Minister in Great Britain.

This film could’ve used the tactic that Clint Eastwood and Dustin Lance Black employed in J. Edgar to show Thatcher’s divisive, hurtful policies but also the heart of a woman who was driven to do what she legitimately saw as the right thing to do.  There is a brilliant scene where she, dressed in a maroon jacket, makes a complete fool out of one of her cabinet members during a meeting.  Lloyd films the scene so that we see the cabinet’s reactions, with Streep as a force of nature at the center of it.  After she abruptly ends the cabinet meeting, the camera cuts to a shot of her unclenching her fists, which begin to shake.  Then it pans out to a shot of that empty table, with the Prime Minister unsure of her next move.

From here, the movie descends into Thatcher’s abrupt exit from Number 10 Downing Street amid inner party bickering.  Morgan’s screenplay makes it seem as if the men are simply fed up with tolerating someone they’d label a bitch being in charge, a cheap way out of a scenario that needed much more examination.  Simplifying Thatcher’s reign as Prime Minister into gender politics undermines the very core of what made her important: her politics were more controversial than her gender.

Failing to fully realize this renders the movie a showcase for acting, which may have been the point all along.  Meryl Streep fires on all cylinders even though simply suiting up as Margaret Thatcher would guarantee her an Oscar nomination.  She makes a movie that deliberately avoids saying anything say something.

1 thought on “REVIEW: The Iron Lady”