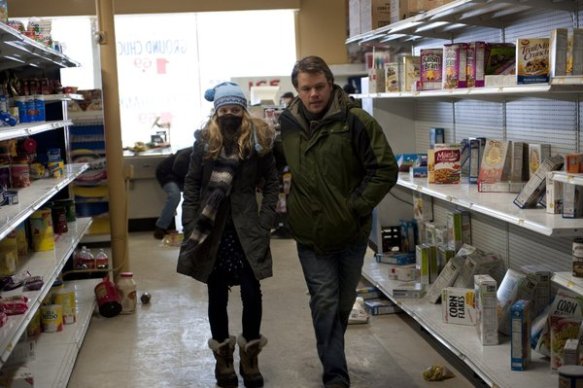 Steven Soderbergh utilizes his big name cast with Contagion, but he does it in a different way than his past movies like Ocean’s 11 or Traffic.  He casts famous stars, then lets a deadly virus loose to kill them alongside the unknowns and the extras.

It’s a familiar strategy, though not to Soderbergh.  Terrence Malick famously used it in The Thin Red Line, though to different, less contagious ends.  We see people like Kate Winslet, Matt Damon, and Jude Law, and we assume they won’t die, but some of them do.

The main point of Contagion, though, is not that viruses spread, or that our collective humanity evaporates as soon as an unknown threatens us.  The movie is a comment on mass hysteria in the age of technology, where a gap-toothed blogger (Jude Law) attracts a following, then preaches a false cure to them for profit.  A, or maybe the, cardinal sin in this movie is blatantly injecting an agenda into the flow of information.  There are no news clips from Fox or MSNBC, but Law’s blogger represents them all.

Screenwriter Scott Z. Burns makes several comments like that one in his script, often using the scientists and government workers as explainers.  This may be part of his strategy, as many of these professionals, especially Winslet’s Dr. Erin Mears, are put into effective emotional context.  Burns’ screenplay bounces from that clinical, sickly beginning into a near-apocalypse by the end. 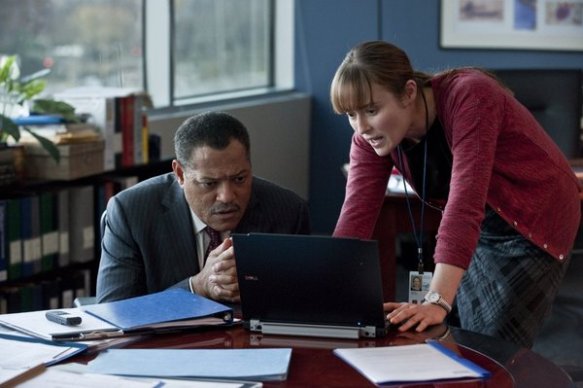 Soderbergh seamlessly blends these two opposing demands from each part of the screenplay.  Original music by Cliff Martinez is Oscar worthy, and used so effectively that it propels the movie over patches that would otherwise be rough.  Conversations are dubbed over, and the motion is kept constant both with the music and Soderbergh’s restless but steady camera.  He tints the screen a sickly yellow when he flashes back to Ground Zero, Gwyneth Paltrow’s character in a casino in Hong Kong.

When Paltrow’s Beth Emhoff returns from that business trip, she gives the virus to her son and they both die.  This is where Matt Damon, in the movie’s only blatenty sympathetic performance as her husband, comes in.  Damon admirably restrains the character’s grief as he tries to save his only remaining asset: his daughter.

There are a slew of other interweaving plot strands, from Marion Cotillard’s World Health Organization executive to Laurence Fishburne’s CDC scapegoat.  They are all placed together precisely, but not so much so that the movie feels detached.  Soderbergh keeps it moving, but also pauses at key emotional moments.  When Dr. Mears finds out she’s sick, we see her watch out the window as a quarantine moves in around her hotel.  Winslet makes her transition from doctor to patient heartbreakingly resonant.

Stakes feel high throughout all of Contagion, as they are meant to with the possibility of the world ending.  While Law’s blogger Alan Krumwiede spouts misinformation and conspiracy to a pulpit of millions, a scientist named Ally Hextall (Jennifer Ehle) emerges as his foil and the movie’s true protagonist.

As played by Jennifer Ehle in the movie’s best performance, she stays behind the scenes to work on a vaccination.  She is fueled by a combination of scientific fascination and, as we learn later, great personal attachment, but Ehle only ever lets on the former.  It’s a performance that shines brighter than the other names lit up in the marquee.

From the red containment suits of Hextall’s laboratory to the sleek offices of government facilities to rioting suburban street and countless other locales, Soderbergh uses pulsating momentum and the color yellow to connect a globalized society in chaos.  Mass panic spreads, sure, but so does an element of hope by the movie’s end.  That being said, I still wouldn’t cough in the movie theater if I were you.

Catch up on other great Steven Soderbergh films at LOVEFiLM such as the ultimate heist comedy film, Ocean’s Thirteen and the Oscar-winning Traffic. With of 70,000 titles and counting you’re sure to find something to watch!