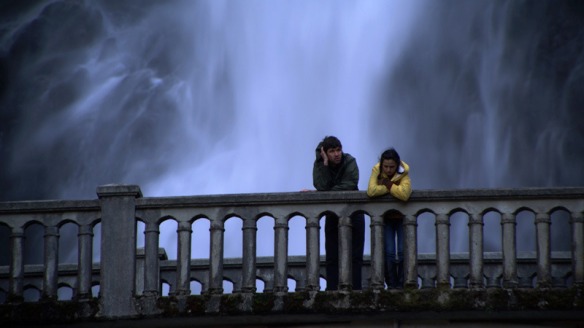 At the beginning of Aaron Katz’s Cold Weather, it seems like there will be no way through it.  The main characters, a brother and a sister wandering Portland, are not interesting enough to sustain interest in a movie where nothing happens narratively.  Thankfully, this emerges as the point as the movie becomes more and more clever without sacrificing its realism.

A sense of being with Doug (Cris Lankenau) and Gail (Trieste Kelly Dunn) as they improvise a missing person’s investigation is Cold Weather‘s most crucial element.  The meandering first third hints at several different directions that it may take but not the one it does take.  Doug gets a job bagging ice with Carlos (Raúl Castillo) and the two engage in casual banter about events in their lives and, most importantly, Sherlock Holmes.

Nods to the world’s most famous detective are the only thing that hint at a mystery.  When Doug’s ex Rachel (Robyn Rikoon) shows up, hints of narrative intrigue are quickly dispelled by a warmth and lack of implied conflict between them.  He invites her to hang out with him, Carlos, and Gail after a bit of reluctant prodding from her to see his place.

Kaz uses this time to somewhat establish a mood.  There are times where his wonderfully framed city shots are edited seamlessly with the story and the score.  However, there are also several instances (especially early on) when that music detracts from his filmmaking rhythm. 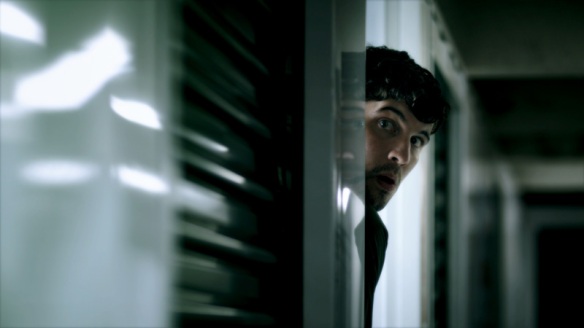 The best and worst examples of the music placement are in driving sequences.  Later in the movie, when suspense becomes a key element, the menacing electronic haze of the score lends itself quite brilliantly.  In the everyday hum-drum of life at the beginning though, it seems too much.

In a movie of such minimalist means, a defyingly out there score like Keegan DeWitt’s sticks out for better or worse.  As mentioned earlier, Katz does scatter several gorgeous Portland vistas throughout the movie, but for the most part he’s directly engaging the characters.  He spends his time capturing the glances of people who aren’t talking or intentionally following the person who is doing the second most interesting thing in a sequence of events.

More often than not, this is Doug.  Doug is a hopelessly uninteresting man, though Cris Landelau adds several touches to him to make him distinct.  The thing that struck me the most about the performance was his walk.  He swings his legs forward at a rapid-fire pace while keeping his upper body almost completely still.  On paper, this should sound like he appears to be gliding from the waist up, but it’s much clumsier and more comical than that.

All of the characters in Cold Weather are lavished with that kind of subtle attention to detail.  As played by Trieste Kelly Dunn, Gail has a way of softly lampooning everything her brother does even as she goes along with it.  His new friend Carlos has the potential to be a lot of things in the hands of Raúl Castillo, including an emotional whirlwind.  He never lives up to any of it.  Though her screen time is briefer than the other characters, you’ll be thinking back on Rachel throughout just to see if Robyn Rikoon left any emotional hints at her character’s potentially tormented past.

Because of who these people are, the answers rarely live up to the classic fiction they aspire to.  These are the type of characters that you feel you could meet in real life but probably never have.  They are surprised when they do things that typical mystery movie characters never blink at, such as slashing tires or escaping a pursuer.  No true answers are given to the mystery, because Katz ends it after the goal is accomplished.

It may seem annoying, but looking back on the events of the story, we aren’t really supposed to see where Rachel’s arc was heading.  She passes in and out of their lives simply as a catalyst, just like real people sometimes do.