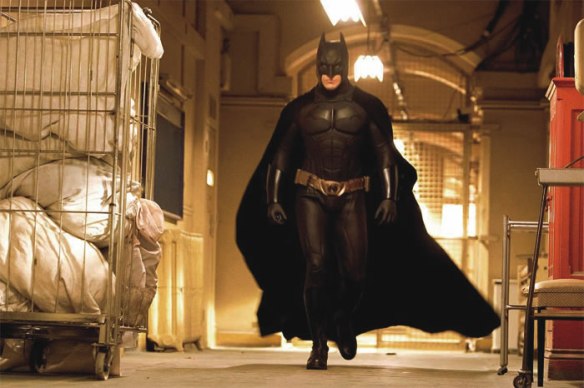 Christopher Nolan goes the route of Stanley Kubrick in his take on the Batman mythology.  Kubrick was infamous for taking acclaimed works of literature and making them his own, just ask Stephen King.  It’s hard to say what Bob Kane and Bill Finger, Batman’s true origin, would say about Nolan’s origin story.  The colorful world is all but stripped away, replaced with the gritty streets of Gotham City and induced with a tinge of noir.

Though he would go on to create a masterpiece in 2008’s The Dark Knight, Nolan needed to establish his version of this world and the principle characters in it.  In that respect he is mostly successful.

Christian Bale was perfect casting for Bruce Wayne, as were Michael Caine, Morgan Freeman, and Liam Neeson in their respective mentor roles.  Gary Oldman is also good as Jim Gordon, the only good cop in Gotham.

Where the casting is lacking is in the love interest played by Katie Holmes and in Tom Wilkinson, who goes so far overboard as Carmine Falcone that you’ll think you’re watching a 30s gangster picture.

Cillian Murphy surfaces as the true villain of this installment, a unique take on Scarecrow that has him as a deranged doctor toying with the mentally ill at Arkham Asylum instead of being one of the inmates.

Nolan begins this tale in the stark setting of a prison with a series of mandatory flashbacks.  He does this uniquely, though, interspersing them with Bruce training in the mountains and Bruce as an angsty youth hell-bent on revenge for his parents’ murder.  We come to find he’s afraid of bats, something his ninja trainer (Neeson) teaches him to embrace along with the deception.

A superhero is born in those mountains with that training, but even though he wears black his morality is laced with shades of gray.  In this universe Batman is constantly grappling with what he will or will not do to bring justice to the Gotham.  The evolving morality is what gives it and, more notably, its sequel such a potent punch.

Once the scene is set for him to finally don his bat-suit, the movie kicks into typical action fare, though it’s shot with beautifully dark visuals.  Wayne kneels in a cave surrounded by bats, luminously lighted; as he slowly rises from his knees to his feet, the camera zooms out to show him becoming one of them.  It’s moments like these that capture the atmosphere of this story, more necessary to it than the sometimes overwrought philosophical musings or Wayne playing up the playboy image or tinkering with gadgets.

Watching a director like Nolan, who has the potential to become a great on the level of Kubrick or Terrence Malick, evolve is interesting because few filmmakers working today exude such vision.  We are watching him in the stage of honing his craft, and though this movie is by no means perfect it announces the stylistic origin of this filmmaker’s future work as much as it does that of his troubled superhero.

The only thing really holding Batman Begins back is when Nolan doesn’t fully embrace his vision.  This is most prevalent in the final action sequences, when Scarecrow is seen riding on horseback through a Gotham City being pumped with his fear-inducing hallucinogen.  This would’ve been at home in the Tim Burton Batman universe, but it’s sorely out of place here.  The best action sequences are the one where Wane plays bat-and-mouse with his enemies, separating and conquering them and still maintaining the movie’s dark tone.

Balancing comic book and realism while still injecting much-needed pathos into the genre is successful in this film by almost any measure.  It is the necessary predecessor to a classic, one that has merits and could stand on its own.  It’s better that it doesn’t.