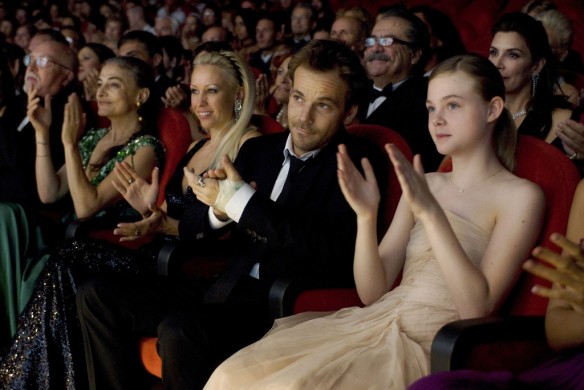 The Coppola pop cultural dynasty is an interesting and often overlooked member of the pop culture framework.  It has produced the immortal in Francis Ford Coppola, who directed masterpieces both well-known (The Godfather Trilogy, Apocalypse Now) and forgotten (The Conversation, Tetro).  Other members include Nicolas Cage, who changed his name to forge an identity away from the family name, and Sophia Coppola, who is the most interesting by far.

This Coppola is also a director, though she tried acting to universal disgust in The Godfather Part III.  Behind the camera, though, she is somewhat of a master.  Her latest, vaguely titled Somewhere, is the kind of film nobody really knows what to do with.  It stars nobody in particular and is about nothing in particular.  She is the only selling point because of the critical triumph of her 2003 feature Lost in Translation.

Somewhere shares many interesting parallels to that film, and I would even go so far as to call this a companion piece.  Lost studies an aging actor discovering a young female friend while shooting a whiskey commercial in Tokyo.  They are two lost souls enveloped in a very distinct, very different culture.  Somewhere tells the story of  movie star Johnny Marco (Stephan Dorff) at the peak of his prime, but still equally lost.  At its center is his relationship with his daughter (Elle Fanning) who sparks a change that subtly works its way to the surface for the audience to see.

Coppola takes her sweet time with this movie, which many critics relished in pointing out (Somewhere goes nowhere!! Hahahaha).  It is the very definition of meditative filmmaking.  Coppola knows how to do this well, and there are many points of expressive visual wit in this film, like when Marco sits in a chair to get his face plaster-molded for his latest film.  She lingers as the people finish their work, letting only his breath and a painfully slow-zoom show his claustrophobia.  Then we see the results of that mold, which is him made up to look like a very elderly man.  Seeing the actor see himself as old is one of the many quiet revelations scattered throughout.

The quiet humor that Coppola wielded in Lost in Translation is even quieter here, mostly because Somewhere isn’t supposed to be as funny.  It absolutely insists on the mundane existence of this obviously very famous person.  There are many moments when you simply watch him smoke and drink while wallowing in his discontent.  In the beginning, he is dozing off to two strippers dancing in his bedroom.  She’s trying to suggest that his life is repetitive and boring, and sometimes she does too well a job at it.

At the core of Somewhere is the father/daughter relationship.  Marco spends his nights boozing and fooling around with strippers, but he’d never be able to handle his daughter doing that.  That may be the main jolt to his system, when we see Cleo (Fanning) arrive early on to draw her name on his cast after he’d just spent the night partying.  Later, she’s left with him after the mother claims she needs some space.  Instead of going for Big Daddy though, we follow these two relatively weird people pretend to be ok with each other.

In the beginning, Somewhere lingers on a deliberately focused shot of Marco driving a Ferrari around a desert race track.  You can’t see him go through the turns, but as he whizzes by several times and then reappears on the other straightaway, you immediately know his character.  He does the same maddening thing over and over again, but he gets to do it in a Ferrari.