Aron Ralston cut his own arm off to escape a boulder that pinned him against a canyon wall.  That much we know.  The rest, drawn from his hallucinatory recounting in his autobiography and combined with some creative liberties from a passionate filmmaker, is a story waiting to be told.

It’s interesting to think how certain directors would handle different source material.  A story like this could tell how Aron recovered after his ordeal, or it could show his ordeal.  If you’re looking for the gooey easy way out, the former is your best bet, but Danny Boyle isn’t going for the easy way out.

Following his one-two punch at the 2009 Oscars with his Best Director and Best Picture wins for Slumdog Millionaire, Boyle largely disappeared from the spotlight.  A movie like that, which was lauded with praise and then subsequently deemed overrated and undeserving of its honors, is difficult to follow no matter how you look at it.  Like his camera often does, he keeps plowing straight ahead, rushing through the action even when he looks back at the past.  His flashbacks are literally gone in a flash.

In 127 Hours, Boyle trades in the streets of Mumbai for the expansive canyons of Utah.  It is here that Aron (James Franco) becomes trapped by a boulder while traversing the landscape alone.  While he still has his freedom he and the camera are in constant motion, biking along the trail while we zoom out and look at the scenery.  The whole movie is shot gorgeously in crystal-clear digital cinematography.  It’s likely the prettiest looking movie you’ll see all year. 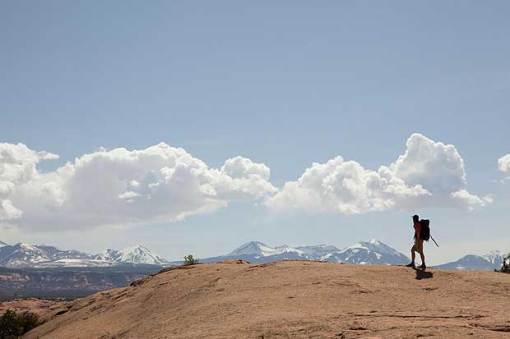 After helping some hikers (Kate Mara and Amber Tamblyn) and taking them for a swim, it’s time for that rock and the hard place.  Boyle contrasts those wide-open spaces from the beginning with several extreme close-ups of Aron’s face and fast cutting as he struggles to escape.  Surprisingly, the movie doesn’t lose its freedom just because Aron does.  Split screens, hallucinations, and flashbacks to pivotal moments in his life innovatively propel this largely internalized conflict forward.

Along for this painful joy ride with Boyle is James Franco, who here gives his best performance to date.  Aron is a free spirit and a joker, and this ordeal in the canyon doesn’t take that away from him.  The constant charm and welcome humor go well with the stylistic exercises, effectively lifting this movie above other true stories.  It operates more as a fable than a biopic.

The aura of surrealism that Boyle creates oddly recalls A Christmas Carol.  It’s structured so that Aron looks to his past, then back to his present, and then on to a future that drives him to break free and appreciate his life more.  A raven flies overhead most days he is in the canyon, signaling death, waiting to cry, “Nevermore.”  His unbreakable spirit has him treat it like a joke, but he soon realizes that if he’s going to escape this canyon alive, the jokes need to stop.

He emerges that canyon with a new sense of purpose, with people embracing him on all sides.  If there is a message here, it’s that people are necessary to life.  Aron was in that predicament precisely because nobody knew where he was.  An unoriginal message, sure, but it hasn’t felt this alive with purpose in quite some time.  Be thankful a big Hollywood studio didn’t get a hold of this story, and then buckle up.