It’s hard to remember the last time I wished death on a character as badly as I wished it upon Carl (Ioan Gruffudd).  Carl is an unconscionable douchebag; a character so poorly written and acted that to watch him in Sanctum is to experience more agony than any of the characters.

For the most part, that’s how it works in this movie, which is to say nothing really does work.  Like last year’s Unstoppable, this is a monster movie with no actual monster.  Instead, the lame-duck characters swim their way through an unexplored cave network that slowly but surely claims most of them in a series of unfortunate and completely stupid events.  It’s the latest in 3D “event” filmmaking.

Sold to an unsuspecting public with the name James “Avatar” Cameron as executive producer, Sanctum really only lays claim to the 3D camera that he used to start this whole debacle/enterprise.  Watching Avatar was to see a new digital age of the movies at its best, while watching Sanctum is seeing it at its worst (so far).

The biggest complaint with Cameron’s film was its script, though now after putting it side-by-side with this unholy mess would make it seem like the work of Shakespeare.  As it turns out, Sanctum actually has the gall to borrow from another ancient poet: Dante Alighieri.  Writers Andrew Wight and Josh Garvin initially do this by basing the unexplored cave system off of the structure of Hell in The Inferno.  It comes complete with a digital guide name Virgil.  As it progresses, though, they kind of leave that whole “literature” thing behind and instead decide to just fill in the remaining crevices with more bad dialogue and stupid deaths. 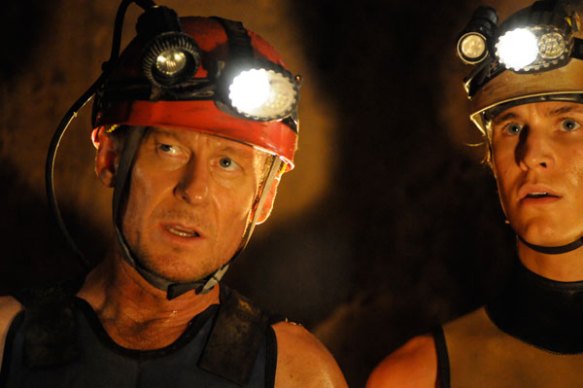 Once the team, a predictably stone-cold expert (Richard Roxburgh), his son (Rhys Wakefield), the aforementioned douchebag (Gruffudd), his inexperienced and whiny fiance (Alice Parkinson) and the sickly computer expert (Dan Wyllie), are trapped in the caves during a storm they must venture back out to civilization. Wight and Garvin kill off the pesky independent, experienced female and the minority right off the bat, leaving a sexist paradise where the only woman is completely defenseless and needs to rely completely on the others to survive.

Alister Grierson, the director, stages this journey with little to no excitement or fun.  Instead, you’re left to be a complete animal, rooting for the deaths of these underdeveloped, poorly acted characters like this was the latest Saw entry.  There’s not one solid performance, and rarely is the editing used to generate any kind of tension.

Naturally, when filming a movie about underground cave exploration there will be some nifty vistas to see.  But the dank walls of rock and the endless swimming soon get old.  The underwater sequences are the best, if only because the characters can’t open their mouths to talk and Grierson must rely on more than that awful talking to advance the story.

Cameron really opened a Pandora’s Box with Avatar, though he may not have realized it at the time.  Until now the technology had only been a gimmick to raise ticket prices.  With Sanctum, it has shown us that this is one piece of technology that has overstayed its welcome and must be sent to a deep, dark watery grave.