To know what you’re going through when you begin Rabbit Hole, know that the comedy is often found at grief counseling.  Yes, this is black comedy, or it pretends to be for a little while.

Adapted for the screen by David Lindsay-Abaire, the same man who wrote the play, Rabbit Hole offers little new in the now commonplace “dead kid” genre.  It weaves in and out through its 85 minutes on a journey to nowhere.  This is the point.  Grief puts life on hold for Becca (Nicole Kidman) and Howie (Aaron Eckhart.)  It doesn’t stop them from aging or any other miraculous time warp commonly associated with the term “rabbit hole.”  It simply keeps them miserable.

“Things are not nice anymore,” Becca tells Howie fairly early on.  For some reason, we must be constantly reminded of that as movie viewers.  Killing off the kid is fast becoming cliche, which is as interesting as it is insulting.  Taking a stab at audience tears by making them relate to one of the most devastating things that can happen to a person is cheap.  Rabbit Hole, for all its musings on space and time, is mostly that.

Another staple of this new genre is that the acting must be superb.  Recent films like I’ve Loved You So Long or Antichrist that dealt with this subject all had terrific performances.  Both of those films took a spin on the genre even if they did gravitate toward the sorrow and the pity.  Rabbit Hole stays buried beneath the safe confines of the direct approach, but its acting is still quite exceptional. 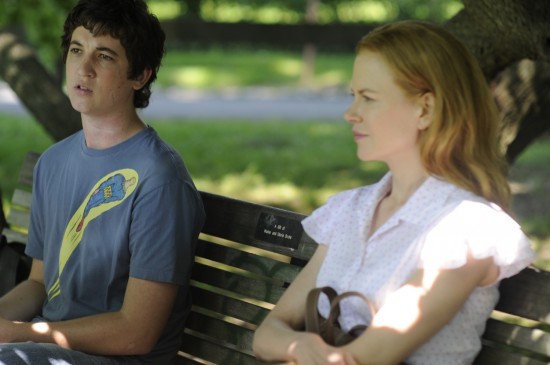 Kidman will likely receive an Oscar nomination for her portrayal of Becca.  She’s been written the juiciest role by far, and she deserves a nomination.  Refusing to hide behind God or any other kind of comfort people in grief often turn to, she chooses to grin when she’s not lashing out.  Thankfully, the film stays away from too many big confrontation scenes, allowing her and Aaron Eckhart to actually act instead of just constantly scream at each other.

Those performances, along with the glowing presence of Dianne Wiest as Becca’s mother, stand on solid ground even if their characters or their movie don’t.  The best moments of Rabbit Hole are the tranquil conversations, and they usually have laughter.  Becca chatting with her mother while cleaning out the dead son’s room or Becca sitting on a bench, chatting nonchalantly with the teenager who accidentally hit him while driving down their block.  Notice these scenes don’t involve Howie.

Eckhart does all he can to put some dramatic juice into his character, but he’s just not as interesting.  It’s a downfall to the film that he has equal screen time with Kidman.

Expect this movie to clean up pretty well nomination-wise when it comes to awards season.  It’s filled with acting potential, and because of that Academy voters will probably think it worthy of a Best Picture nomination.  Never mind that as a movie it goes nowhere or that visually it’s as commonplace as any upper middle class Lifetime drama.  Rabbit Hole enters the abyss of Hollywood award season, hoping that its talk of parallel universes and Greek myths will give it some Oscar street cred and cloud the fact that it’s really just another trophy-hunter.  It’s too bad, in an alternate universe it may have been a pretty good movie.