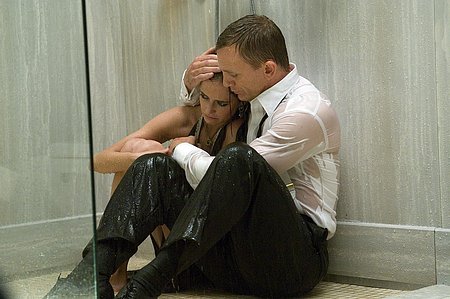 A lot of people didn’t want James Bond the movie character to have an origin.  One of the most iconic screen characters of all time hadn’t needed one after twenty films, and with the announcement of some blonde nobody taking over for Pierce Brosnon, tensions rose and spite was emitted before the movie even finished filming.

When the movie came out though, stunned silence from those unfortunate critics.  Seeing Martin Campbell’s realistic reboot of the 007 franchise after the Brosnon super-hero version left audiences turned off gave fans and newcomers alike one of the most entertaining movies they’d seen in years.  In fact, Casino Royale rates up there with the best of the Bond films, and it may even be the best.

Thankfully, Royale doesn’t tell Bond’s entire life story.  We instead follow him as he reaches “00” status within MI6 (Britain’s version of the CIA for those unfamiliar).  To earn this, he must eliminate two high value targets within a close time proximity.  In a visually stunning and masterfully written black and white opening sequence, we see him do this.  He fights to the death with a thug in a bathroom, tearing it a part.  This is interspersed with him telling his second mark how it happened, before coolly planting a bullet in his head.  From the get-go, we know this one is different.

What follows is a cross-continent journey in Bond’s attempt to stop the ruthless La Chiffre (Mads Mikkelson), a banker for terrorists who cries blood (this still is a Bond movie, after all.)  This mission culminates in an engrossing high-stakes poker game in Montenegro.  Even if you know nothing about poker or gambling (you can learn here: http://www.onlinecasinoaustralia.com.au), Campbell films it with such tension you’re bound to still be entertained.  It’s also broken up with intense fight scenes and witty British banter between Bond and Vesper “Money Penny” Lynd (Eva Green.)

What makes this film so different than its 20 predecessors is that it makes you feel Bond’s inner conflict and torment.  The violence is not just for fun.  In a grisly fight scene between rounds of poker, Vesper assists James in helping to strangle one of the crime lords.  A while later, she sits huddled in the shower still in her evening gown.  “It’s like there’s blood on my hands, and it’s not coming off,” she says.

If that makes it sound like there aren’t jaw-dropping action sequences with amazing set pieces, then that’s a mistake.  Scattered pretty frequently throughout this movie’s driving narrative are some of the most well executed action sequences ever seen on film.  From a jaw-dropping chase through an African construction site to one hell of a finale inside a sinking Venetian house, beautiful scenery and fast-paced brutality continue to be a staple of the Bond films.

Though his intuition and ego are still ever-present, Daniel Craig’s Bond goes deeper than any of the others, finding what drives this complicated character.  One of the biggest complaints people have with Casino Royale is that it detracts into a love story in the last third.  Not only are these scenes excellently written and acted, they’re crucial to understanding how Bond came to be a trust-no-one, ruthless agent he is in all the other films.  You feel the tenderness between him and Lynd, and the heartbreak later on.

Eva Green is a great asset to the cast.  She brings spit-fire and passion to a character that until this movie was never fully realized.  Her reluctance to get involved with Bond is understandable, and when she gives in it makes it all the more eloquent. She subverts Bond girl cliches and gives us a female character that is actually interesting and not just eye candy, although she’s that as well.

The rest of the cast is also excellent.  Mikkelson is great as the vicious La Chiffre, bluffing his way through poker and then stunning audiences with one of the most gruesome torture scenes in recent memory.  Dame Judi Dench is reliably excellent as M, spouting rage and wisdom as if she were born to do it.

Not only is Casino Royale a new direction for 007, it has some nifty tricks up its sleeve that heavily influence the action genre to this day.  The storytelling is flawless, as is the cinematography.  It’s not only one of the greatest franchise reboots, it’s an action milestone, and a grueling reminder that they really don’t make ’em like this anymore. At least not often enough.