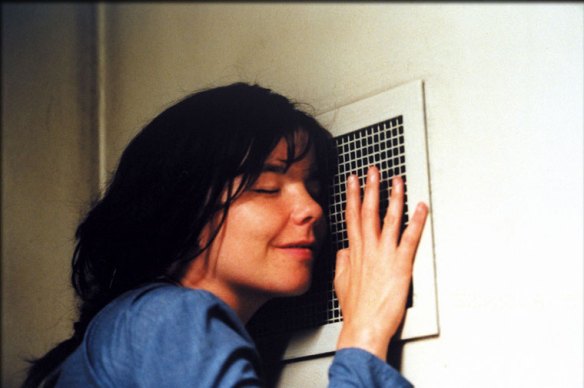 Brilliant auteur and unapologetic cinematic sadist Lars von Trier is one of the movies’ most polarizing figures among critics.  He has a cult following of fans, some of which are the most respected film scholars working today.  Almost all of his movies follow an artistic pattern of well thought out shots that often contain disturbing images.  This is where Dancer in the Dark is unique.

Von Trier’s emotionally wrenching film has a visual style that many will recognize from Cloverfield or NBC’s The Office.  It may throw fans off, and that’s probably his intention.  As a member of the Dogma style of film making, it is this director’s goal to throw you for a loop by defying everything held sacred in the movies.  He deconstructs typical methods and injects heavy amounts of emotion and tragedy in order to confound the viewer and leave them uncertain about what they’ve witnessed.  Dancer is no different in this regard.

Chronicling the life of a Czech immigrant Selma (Björk) with a hereditary eye disease that renders her almost completely blind, the story focuses on her saving up money for an operation for her son so he won’t face the same dark fate.  Selma holds down a job at a factory thanks to the help of her best friend Kathy (Catherine Deneuve), who helps her pass eye tests and picks up her lag on the factory floor.  Tragedy begins to strike when her neighbor and landlord Bill (David Morse), who also happens to be the local police officer, steals all of the money she’s been saving.  She goes to retrieve it, he tries to arrest her, and she kills him.

It is after this brutal sequence that Selma begins to retreat more frequently into a world mirroring the musicals she visits frequently with Kathy.  These sequences inject optimism into the tale at times, but the happiness can be equally chilling because of when they take place.  Selma often redeems and justifies herself in these sequences, and though she is largely a sympathetic character, Björk will freeze your blood.

When society and Mr. von Trier began to turn on the protagonist, Björk handles it with such emotional power that you will be shocked by the film’s devastating final scenes.  Though the film is not for everyone, there is no denying the power of her performance; her far away eyes, her beguiling smile, and her despair will devastate you.  It’s something new in film acting, and stands among the great film performances of not only the 2000’s, but of all time.

The rest of the cast is also excellent, especially Ms. Deneuve.  Her touching devotion to Selma, most notably in the scenes where she takes her to see old musicals, give the movie more than emotional baggage.  David Morse manages to render some sympathy in his character, making him pathetic when he could’ve just done a one-dimensional monster.

The documentary realism hinders the film.  Von Trier is capable of visual wonders, see Europa or the far more disturbing Antichrist for proof of that.  Some of the choreography for the musical numbers shows that it was indeed an experiment for the man who constantly does it.  The visual tint on the screen during those numbers make it feel different, and the abrupt cuts back to reality are strengths.  Though he did the subconscious musical numbers before Chicago, they can’t touch that movie in terms of the songs or the choreography.

In the end, it’s up to Björk to carry this movie through it’s mishaps, and she does it and then some.  Though they bickered and fought on the set, von Trier and the Iceland’s experimental singer work together to make a film that will engage, disturb, and pummel you.

5 thoughts on “ARCHIVE REVIEW: Dancer in the Dark”