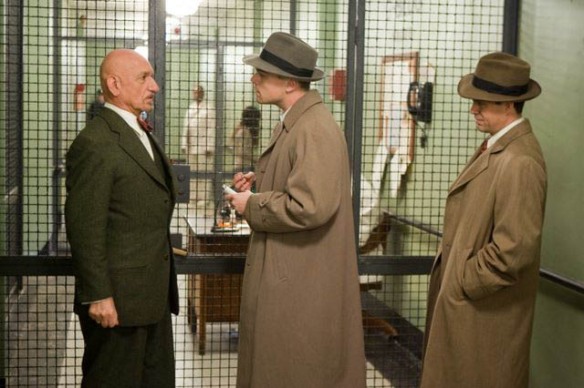 Martin Scorsese’s first narrative film since his 2006 masterpiece The Departed had a lot to live up to.  Then again, anytime people in the film business hear that Scorsese is doing a film, he has a lot to live up to.  The master behind the aforementioned Boston crime epic as well as classics like Taxi Driver and Goodfellas puts a violent stroke of genius on almost everything he touches.

Shutter Island is no exception.  The fantastically directed, acted, and edited film comes alive like no film in the movie-dead winter months should.  Will it be one of the best films of 2010?  It may very well be, but typically the earlier ones get drowned out by the falling leaves of Oscar bait in the fall.

Teaming up with Leonardo DiCaprio for the fourth time, Scorsese adapts a Dennis Lehane novel about a mental institution that is hiding more than meets the eye.  Washed up premise?  Yes, but it is constructed so well that you won’t really notice until you think about it later.

DiCaprio plays Teddy Daniels, a  federal marshal sent to investigate the disappearance of the patient Rachel Solondo on the maximum security psych ward known as Shutter Island (San Francisco’s Alcatraz penitentiary with even more fog if that helps you visualize).  Daniels is a tragic character, seasick when we first meet him and grief-stricken over the suicide of his wife Dolores (Michelle Williams).

The dream sequences and flashbacks Scorsese constructs featuring DiCaprio and Williams are some of the most hauntingly beautiful images the filmmaker has ever created.  Daniels revisits the events of her death in his nightmares, watching as she bleeds out and collapses into ash.  Those thinking Scorsese is only capable of violent crime epics will be stunned at the raw feeling and cinema poetry he creates in these dream sequences.

Back in the reality of the dankly creepy island, though, darker things than Daniels’ dreams are afoot.  He is accompanied by his new partner Chuck Aule (Mark Ruffalo).  The two detectives question one of the heads of the ward, Dr. Cawley (a creepy Ben Kingsley).  Once they learn of the situation with the escape, they interrogate the nurses, orderlies, and patients of the facility to try and figure out how Ms. Solondo did it.  They get nothing out of any of them.  Everyone appears to be either coerced and coached into saying nothing, or too crazy to know what’s going on.  Either way, the detectives know something is fishy.  Daniels received information from someone who was released from the island that the doctors were performing horrendous procedures.

It takes a storm building throughout the whole first third of the movie coming to its apex to finally get the two marshals what they want: access.  It takes out all of the electrical fences and security parameters, setting the inmates free on the island.  With the guards and doctors distracted, they sneak into the restricted ward where all the suspected mishandling is taking place.

From here the movie steps into bold territory.  Daniels and Aule uncover twist after twist.  The highlights include an encounter with a schizophrenic inmate (Jackie Earle Haley) and the illusive Rachel Solando (Patricia Clarkson).  Haley and Clarkson steal their respective scenes, bringing tragic events and harrowing revelations to light.

I won’t give anything else away because watching the surprises and twists unfold is the only thing preventing the viewer from realizing how worn the actual premise is.  Add in a semi-distracting Holocaust subplot, and you’d think Scorsese was trying to recreate a Steven Spielberg movie.  The post-war paranoia worked in his 1976 classic Taxi Driver, but that’s because we only saw the tragic after effect and not the actual events.  Though these minor flaws will drive you slightly insane, all of Scorsese’s crazy love of the cinema and fierce dedication to his craft make Shutter Island a midwinter epic not to be missed.