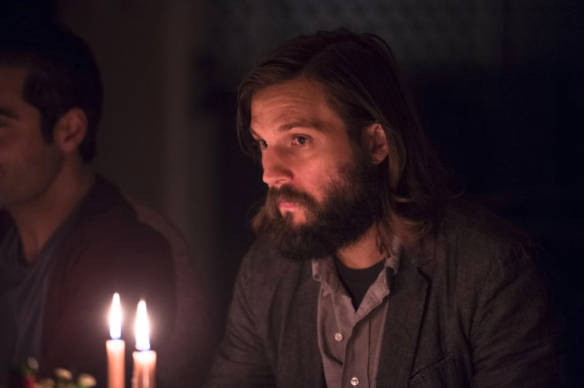 Will wants to believe something is wrong.  From the moment he arrives at his ex-wife’s sleek home overlooking Los Angeles, everything seems a bit out of place.  It’s not just what Eden (Tammy Blanchard) and her new husband David (Michiel Huisman) are hiding, it’s what they’re telling everyone.  This is the first time Will (Logan Marshall-Green) has visited the home in two years, since tragedy did irreparable damage to he and Edie’s relationship.  He is still shaken up by it, but she seems much more composed.

Eden’s newfound serenity is eerie and disingenuous.  In The Invitation’s well-placed flashback sequences, triggered by Will’s memories of particular rooms in the home, she’s frantic and violent in the aftermath of the tragic event.   Now she slinks through the same home like Lana Del Rey with a less well guarded secret. What are she and David hiding, exactly? They reveal quite a bit, like how they went to Mexico and learned to purge themselves of guilt and sadness with a mysterious organization.   Everyone at the dinner party, which includes Will’s new girlfriend Kira (Emaytzy Corinealdi), five of he and Eden’s mutual friends and two that she and David know for this cult-like healing group, is shown a kind of recruitment video for the group.  In it, a calmly assured man hovers over a dying woman, explaining how the others in the room are absorbing her spirit as she passes away.

Instead of switching to a full screen when the video is played, director Karyn Kusama scans the room, hovering over the uncomfortable faces of the guests and the serene expressions of the people who buy into The Invitation.  Kusama builds an increasingly intense mood of dread by honing in on Will’s discomfort, using Theodore Shapiro’s score to make the hosts’ smiles and generosity seem more and more unsettling.   The gloss that Eden seems to have over her life upsets and disturbs Will more than anything, even a video of a woman dying.  He questions her new husband when he locks the door and takes away the key, and pushes even harder when the couple tries to convince an uncomfortable guest to stay.

Will wants to see the crack in their chipper demeanor, for them to admit that they’re hiding something.  Though the movie shares his unease, it doesn’t let on whether or not his suspicions are completely valid.  Strange as Eden and David might seem, they’re very inviting.  Their unfamiliar guests from Mexico, a free-spirited woman named Sadie (Lindsay Burdge) and a quietly assured man named Pruitt (John Carroll Lynch), seem much more dangerous.  Carroll Lynch in particular is an imposing screen presence.  His arrival signals menace from the get-go, though it isn’t until he tells a disturbingly calm anecdote that people start to get uneasy. 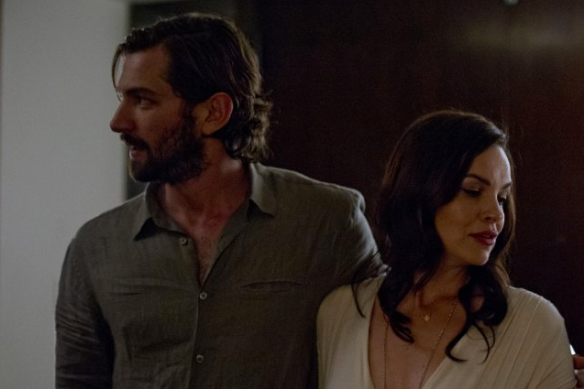 Kusama’s film is relentlessly suspenseful.  The lavish home where the movie is almost entirely set has a sinister night glow to it; as the evening wears on, it seems more and more unlikely that people can actually leave when they want to.  Thinking back on The Invitation, I was reminded of a quote from David Fincher’s 2011 adaptation of The Girl With the Dragon Tattoo. In the scene where a key villain reveals himself, he takes some time to gloat to his prey:

“Why don’t people trust their instincts? They sense something is wrong, someone is walking too close behind them… You knew something was wrong but you came back into the house. Did I force you, did I drag you in? No. All I had to do was offer you a drink. It’s hard to believe that the fear of offending can be stronger than the fear of pain. But you know what? It is.”

There is no such monologue here, but The Invitation thrives on the tension created by breaking unspoken social rules.  Eden, David and the other two cult members politely but forcefully push the other guests to reveal their true desires (and to keep drinking wine), but why?  This can include something as simple as asking David for cocaine or asking another (married) character for a kiss.  Kusama often often pulls back the camera to survey the group dynamic, punctuating these scenes with close-ups of WIll’s paranoid glances.

Many of the characters are forgettable and thinly sketched, even as they’re pushed to indulge in their fantasies.  However, the script, by Phil Hay and Matt Manfredi, works because it weaponizes its hosts’ politeness.  Huisman gives David’s tender, confident masculinity wicked undertones simply by holding eye contact with Will and the others for a second or two too long.  Blanchard’s Eden has outbursts of anger that she quickly patches up by retrieving more wine and profusely apologizing.  When The Invitation does descend into violence in its final third, it’s shocking not because it happens but because of how it happens.  Kusama has created a potent examination of repressed grief that is calmly, calculatedly terrifying.