Director Scott Cooper needs to free himself from the burden of story.  All of his movies, from Crazy Heart to last year’s Out of the Furnace to his latest, Black Mass, are set in very specific, interesting milieus and held down by their scripts’ insistence on plowing through plot points.  This is a bigger problem in Black Mass, the story of notorious Boston gangster James “Whitey” Bulger (Johnny Depp) and his fraught alliance with the FBI agent John Connolly (Joel Edgerton), because the story Cooper is telling is so vast that the movie is reduced to a series of brutal murders.

Adapted by Mark Mallouk and Jez Butterworth from Dick Lehr and Gerard O’Neill’s 2001 book of the same name, Black Mass punishes Connolly while mythologizing Bulger.  This is partially because of the built-in audience history with Depp, whose very presence makes Bulger into a movie star.  Cooper doesn’t know how to play with this idea like Michael Mann did with Depp in his 2009 John Dillinger film Public Enemies.

Depp’s performance has hints of greatness in it, from his maniacally still blue-gray eyes to the actor’s impeccable (and, honestly unexpected) restraint.  But he’s lost in the movie’s muddled, rushed narrative, which starts in 1975 and sprints to Bulger’s arrest in 2011. (So are excellent supporting performances from Dakota Johnson and Peter Skarsgaard.)  Edgerton fares better because his character is the movie’s true core and his arc is allowed to fully play out; he’s a man trapped by bureaucracy who becomes tempted and ultimately consumed by Bulger’s lifestyle. 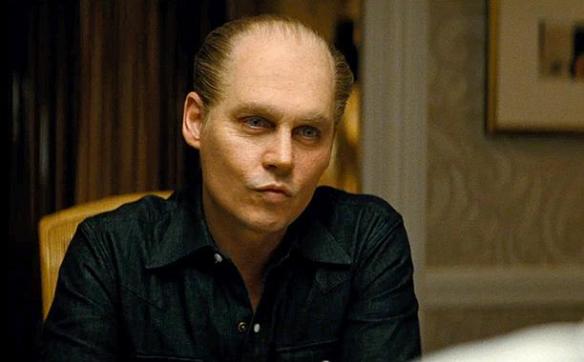 Connolly and Bulger grew up together in Southie, and the movie suggests that Bulger defending Connolly as a kid is at the core of their bond (and, essentially, of Connolly’s downfall).  A few detours to Miami for business aside, Black Mass is largely set in Bulger’s South Boston turf in the mid-70s and early 80s.  That specific sense of place– the endlessly cloudy skies, the smokey, dim bars, the abandoned homes and warehouses where Bulger conducts business– are the movie’s greatest asset. Cooper’s Boston feels appropriately dirty for the story he’s trying to tell.

Unfortunately, the characters never truly come alive in these spaces, in fact it’s often quite the opposite.  Black Mass’ murders are many and varied.  They essentially become rewards for watching.  Perhaps the most disturbing of these is the killing of Deborah Hussey (Juno Temple), a prostitute who spends a night in jail and is shortly after strangled by the paranoid Bulger in front of her stepfather (who she has been having sex with).  Unlike the other murders, which are often bloody and very blunt, Cooper shows only the beginning of Hussey’s murder and then pans over to her tormented stepfather, zooming in on his face as he watched.

Black Mass is a fairly typical gangster movie in that it focuses on the gradual unraveling of a patriarchal subculture and largely discards women.  But what bothered me about Hussey’s brief scene is that not even her death was her own.  She’s one of the few female characters who actually have speaking lines in this movie and the only one killed on screen, yet the suffering in this scene belongs to her stepfather (Rory Cochrane) and this is meant to be more impactful.  When Bulger is done killing her he drops her body on the floor, leaves the room and says “Clean up your fuckin’ mess.” His sadism was directed at his own employee, and Hussey comes off as just an afterthought.

Hussey’s murder coincides with an FBI interview with her stepfather, where he’s asked if he’s ever watched Bulger kill anyone.  He stares back without answering, and his tormented eyes seem to be reliving the scene that just happened.  There are many of these flash-forward interview scenes with Bulger’s other associates scattered throughout Black Mass, none as simple or as powerful as that one.  They are mostly annoyingly basic and unnecessary, and serve mostly to explain things we’ve just watched or fill in large gaps of time.   The period I was most interested in, Bulger’s more than 10 years as a fugitive after his empire unravels because a newspaper outed him as an FBI informant, becomes a footnote at the end.  His violent tango with the FBI is never more than the sum of its body count.  Sadly, it takes up almost the whole movie, while his downfall is so swift and muted that if you blink you might miss it.