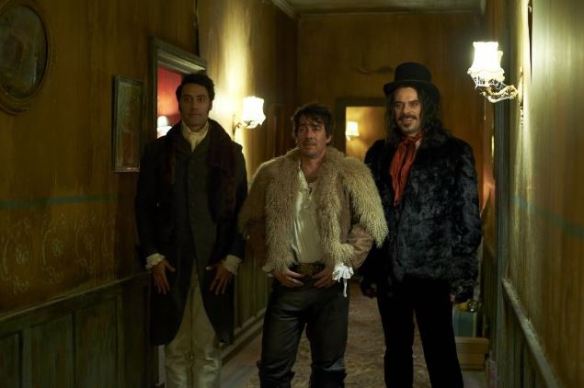 The staying power of the “mockumentary” never ceases to amaze. Right when the genre seems to have been flogged to death, something new emerges to inject more life. What We Do in the Shadows, the new film from co-directors Jemaine Clement (Flight of the Conchords) and Taika Waitit, is its latest triumph. Lying close to the sweet-natured deadpan films of Christopher Guest, its innumerable successes come from, among other things, a clear love and dedication to the form. The directors, who also star in the movie, shrewdly take on everything from hokey History Channel infotainment to MTV reality shows (The Real World and True Life, especially).

There is nary a second that isn’t filled with some sort of visual gag, sharp quotable or savvy edit – and almost every decision is a success. Viago (Taika Waitit) is a modest vampire living in a New Zealand estate with his three flatmates Petyr (Ben Fransham), Deacon (Jonathan Brugh) and Vladislav (Jemaine Clement). The four have consented to a documentary crew following them around in the months leading up to the Unholy Masquerade – the big annual event for all things evil.

Viago is the kind romantic, yearning for another opportunity with a lost love; Deacon, an ex-Nazi vampire, is the “badboy” of the group; Vladislav is an ages-old pervert who used to torture innocents by, literally, poking them; and Petyr is the 8,000 year-old monster downstairs, kept locked away and out of sight (and resembling a certain Murnau creation). When not drinking the blood of humans (Viago notes, the unfortunate part of being a vampire), the guys are content on leading a relatively low-key existence. Immortality, they concede, certainly doesn’t mean one is excused from doing the dishes and sweeping the hallway. 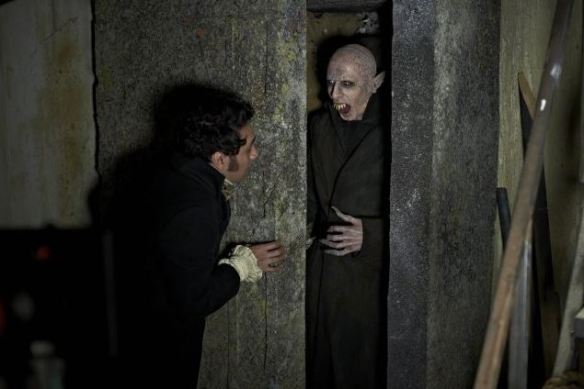 Waitit and Clement constantly play on the vampire mythos clashing against (or, rather, adapting to) modern-day banalities. In a scene near the beginning, the guys roughly sketch each other on sheets of paper to deal with the serious problem of having no reflections while getting ready to go out. Once out on the town, they must be invited in to the clubs, which results in begging the bouncers for entry. The hurdles in getting a victim back to their place seem endless, and when they actually do manage a mild success, it’s often fumbled through their clumsiness and rusty tactics.

Deacon, fortunately, has a servant named Jackie (Jackie Van Beek) that, in addition to doing upkeep work, assists them with collecting victims, in the hopes of being turned into a vampire herself. When she brings two “virgins” back to their house, the plan backfires, and one of them, Nick (Cori Gonzalez-Macuer), is turned into a bloodsucker and new member of the family. From that point on, the happy house shifts into a power struggle between the old vampires and the new – the dynamic compromised by Nick bringing in a human friend, Stu (Stuart Rutherford), and bragging about his new vampire abilities at the bar (“I’m the guy from ‘Twilight’”).

Nick resembles that disingenuous housemate all-too-familiar on reality shows; the one who gets his rocks off from heavy drama, consistently (and, sometimes, unintentionally) stirring up trouble. And this certainly isn’t the only way the film resembles reality television – it includes a re-enactment, an intervention, a montage of trying on clothes and talking-head confessionals. Divulging some of the best gags would be doing a major disservice to the film, which is best served cold, but the highlights are numerous – and many indulge a keen familiarity with the most pervasive documentary tropes.

The movie is brisk, and almost exhaustingly clever. If not all the jokes land (and a few don’t), it has more than enough to cover for the occasional lag into uninspired territory. Its charm is rooted in a script that pays loving tribute to vampire lore and cringe comedy (In an interview with The Dissolve, Clement and Wahiti cite This Is Spinal Tap as a major inspiration), and a cast of uncommonly likeable characters. Those familiar with Clement’s television show Flight of the Conchords will already be accustomed to the actor/director’s brand of Kiwi-comedy, mastered by this point, drawing laughs most often from naivety and awkward situations. What We Do In The Shadows is more of the same, but done so well it feels brand new again.