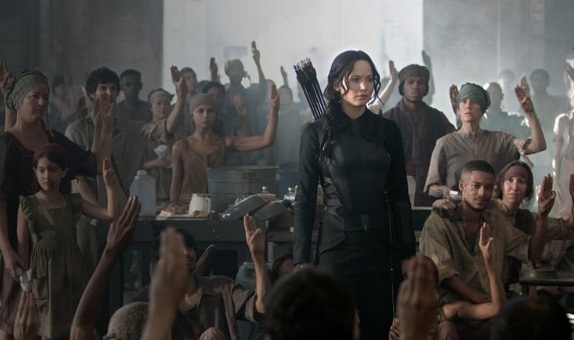 The Hunger Games: Mockingjay Part 1 – The premiere dystopian young adult franchise continues its gradual steps forward in quality in this third installment, which is slightly more above average than the second.  In Mockingjay Part 1, Katniss (Jennifer Lawrence) is at the center of a propaganda machine for a rebel group attempting to overthrow the sinister, Donald Sutherland-led central government.

This set-up, whether intentional or not, makes this third Hunger Games at times feel like a commentary on franchise filmmaking.  The rebellion’s leaders critique Katniss’ blank, disinterested performance in the propaganda in the same way Lawrence was picked apart for her apathy in the first film (to her credit she has vastly stepped up her game since then).  That’s the most interesting thing about Mockingjay, aside from seeing Philip Seymour Hoffman and Julianne Moore share the screen as those scheming rebel leaders.  Director Francis Lawrence choreographs the uprising with just enough ferocity to make it resonate while still restraining it enough for a PG-13 rating.  Grade: C+

Whiplash –Damien Chazelle’s Whiplash, about the maddening relationship between an aspiring jazz drummer and his college conductor, is more interested in blood than music.  It’s interested in both, to be sure, but the only way that Fletcher (J.K. Simmons) knows a drummer is serious is if they soak through the bandages on their blisters.  He finds a star pupil in Andrew (Miles Teller), who’s willing to run to a concert bloodied from a car crash to prevent a lesser student from drumming his parts.

What makes Whiplash more interesting than most mentor/student relationship movies is in Chazelle’s single-minded focus on both men’s sociopathic impulses.  He introduces a romantic subplot for Andrew only to destroy it before the halfway point.  When he tries to rekindle the relationship before the grand finale, she asks if she can bring her boyfriend to watch him perform.  Ultimately all he actually wants is Fletcher and his homophobic drill sergeant rhetoric; at first he’s determined to be the favorite, and then he wants to destroy his teacher.  Simmons’ performance in this film is ferocious, and though it hits a few narrative rough patches in the second half, I don’t think I breathed for the last 15 minutes. Grade: B-

Force Majeure — Ruben Östlund’s hilarious, hypnotic Force Majeure is a precise deconstruction of gender norms set at a lavish ski resort in the French Alps.  Much of the movie’s drama comes from the shame that Tomas (Johannes Kuhnke) feels when he fails to measure up to his patriarchal role.  On day two of a family vacation, a controlled avalanche gets a little out of control and envelops them and their two children in a blinding mist while they eat lunch; he flees with his phone, his wife Ebba (Lisa Loven Kongsli) hides with the kids under a table.  The chic, hyperreal ski resort enforces gendered society and its unofficial blue and pink uniforms, and the mini-avalanche shows just how easy it is to sweep them away.

Not long after that, Ebba recounts his act of cowardice to another couple at dinner. She laughs at him when she tells this story, and he’s so embarrassed that he freezes and instantly begins denying it to an uncomfortable extent.  Östlund draws out Tomas’ (Johannes Kuhnke) pity party for almost the entirety of their five-day vacation, often cutting to other people’s quietly judgmental faces.  As his attempts to reclaim his until-then unchallenged role as the head of the family become more desperate, the movie becomes funnier and more bizarre.  Ebba is baffled and eventually furious at his stubborn refusal to acknowledge what happened, though when he finally does admit it his breakdown is so pathetic that she regrets that, too.  Grade: A-

The Overnighters – A documentary about the ironic cruelty of a small Christian town, The Overnighters is a bleak, unrelenting experience.  When Pastor Jay Reinke takes in impoverished people who desperately flock to North Dakota for fracking work, he finds himself challenged by city council and members of his own congregation.  They’re uncomfortable with the men, especially once the town newspaper exposes that some of them are sex offenders.  However, director Jesse Moss keeps his distance, refusing to share in the community’s judgment and focusing on Pastor Jay’s attempt to see the person in front of him instead of their past.

I wish The Overnighters was twice as long as it is, especially since the revelation that Jay is repressing his homosexuality comes out in the last 10 minutes and the narrative seems to sprint to the finish.  Because of this, he’s forced to resign from his parish in disgrace and finds himself in the same position as those he was helping.  Wanting to keep watching is a testament to what’s already there, and Jay’s willingness to remain a documentary subject could very well have changed once the tables turned, so it’s hard to hold the movie’s sudden resolution against it. Grade: B 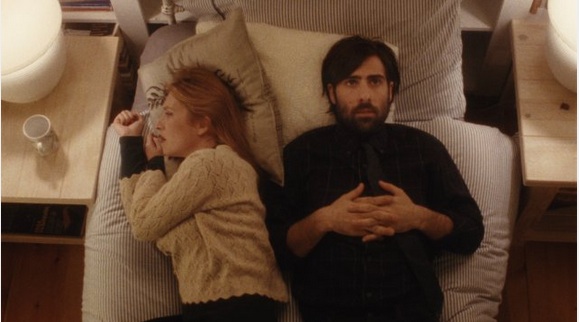 Listen Up Philip – Though there’s only one name in the title, the focus of Alex Ross Perry’s razor sharp Listen Up Philip is sporadic.  In addition to Jason Schwartzman’s gruelingly narcissistic turn as budding novelist Philip Friedman, there’s Ashley (Elisabeth Moss), his annoyed photographer girlfriend who adopts a cat and moves on when he goes to a rural cabin to write.  That cabin belongs to Ike Zimmerman, an older, sadder and equally narcissistic novelist played by Jonathan Pryce.

Philip is one of the most infuriating characters in recent memory, and Schwartzman pulls no punches.  We first meet him through the narrator, who explains how infuriated he is that his ex-girlfriend is late for lunch.  He “punishes” her by withholding a signed copy of his new book. When the movie takes a break from him to chronicle Ashley’s recovery from their break-up, the quiet calm she seems to be feeling I felt as well.  The intimate proximity Ross Perry has with the characters makes it impossible to escape Philip’s destructive whirlwind of self-loathing and self-absorption; even when he’s in love, he’s insufferable. Grade: B+