Muslim culture, to put it mildly, is not something familiar to most Americans, and post-9/11 fears have done little to educate.  Asghar Farhadi’s A Separation is a tense, masterful film set in modern day Iran, and totally immersed in the often-feared culture of that “Other.”  Farhadi’s grasp of middle and lower class Iranian life is key to transporting us to this world. The focus is not on the explanation of the culture, though; above all else, A Separation is a study of family and religious ties, mostly their intersections and compromises with each other.

It begins with Nader (Peyman Moadi) and Simin (Leila Hatami) facing the camera speaking to an unseen judge.  She is asking for a divorce and custody of their daughter so she can move out of Iran; he only agrees to the first.  Putting us in the perspective of the judge encourages us to take sides, as does the rest of the movie.  Farhadi, on the other hand, deliberately avoids this.

Nader refuses to leave the country because of his Alzheimer’s-ridden father.  By placing their daughter Termeh (Sarina Farhadi) in the middle of this marital struggle, Farhadi is commenting on what exactly holds this family together, which is ultimately nothing.  The main conflict in the story is not in that marital separation but in various religious ones.  When Simin leaves, Nader hires Razieh (Sareh Bayat) to take care of his father.

One day, Nader comes home to find his father lying on the floor unconscious, his arm tied to the bed post and the maid and her daughter gone.  When she returns from her “private errands” he bickers with her and then pushes her out his door.  She was pregnant, and has a miscarriage. Her hot-headed husband sues Nader (she is not able to in Iran). 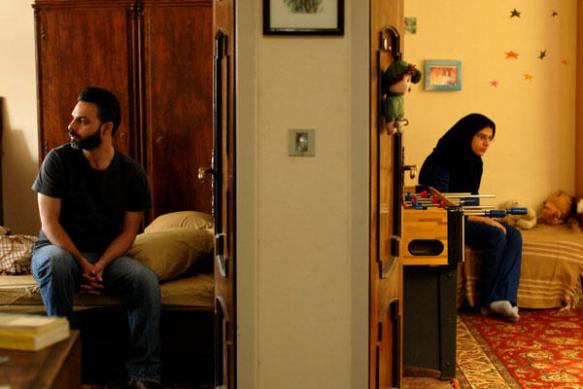 There is more, much more, to the film’s plot than that, but giving it away would lessen the impact.  Farhadi structures this story with a keen sense of suspense, leaving out key details until they would be most impactful and revelatory.  What’s fascinating about the movie’s story from an American perspective is how seamlessly it is integrated in Iranian culture.  The courtroom scenes are particularly thrilling.  Instead of a full courtroom spectacle, they are intimate office spaces, with a shockingly authoritarian judge able to decide the fate of the characters as he sees fit.

Each character is so masterfully written and acted that it’s easy to get lost in the film’s world and not notice Farhadi’s invisible filmmaking technique.  Family members often view each other through a slightly smudged glass when in their home, and the camera lingers on the young daughter just as much as her parents. She is, after all, the easiest way into the narrative.  As accusations and lies fly faster and more intensely, the young Termeh is ultimately tasked with making the major decisions in the film along with the audience.  Her father unfairly forces decisions on her that are well above her age and against her typical role in this society.

Much of the decisions that the characters grapple with become even weightier because of how they are impacted by Islamic doctrine.  Razieh is the most devout character, and Sareh Bayat’s devastating performance sticks out in an outstanding cast.  From how she restrains herself in the courtroom because of her gender to the subtle way she adjusts her Chador when she’s nervous, she is a perfect example of how well drawn-out every gesture and line of dialogue is in this film.

American movies are often afraid to end on a note of ambiguity, but A Separation certainly isn’t.  It leaves one final decision open for interpretation, and if Farhadi had made it for the audience he would’ve had a lesser film if still a truly great one.  This movie’s success at the Academy Awards signals its quality, but not as much as it signals American audience’s openness to a movie about a controversial “Other.”  It also harkens the emergence of a major filmmaking voice, and though much of its culture is foreign, its humanity certainly isn’t.

3 thoughts on “REVIEW: A Separation”