Imagine the difficulty of trying to mug someone during an alien invasion.  You’ve just pulled a knife on an unsuspecting “Lone Woman At Night” (a stock character if ever there was one) and are about to collect your dues from her purse, when the car next to you explodes after something from the sky hits it.

If you find that a hard premise to relate to, you may have trouble with the beginning of Attack the Block, an alien invasion film set in the ghetto of South London.  Moses (John Boyega) and his gang of teenage would-be thugs fend off extraterrestrials after ruining the night of Sam (Jodie Whittaker), a new nurse who they eventually find out lives in their same apartment building.

The simple idea behind newcomer Joe Cornish’s competent, efficient debut is that every group is alien to outsiders.  While he does not excuse the assault at the beginning of the movie, he does create a situation where the victim and the assailants are allowed to see each other more clearly.  In an apartment building assaulted on all sides by furry black monsters with glowing turquoise teeth, they must stop fighting and try to survive. 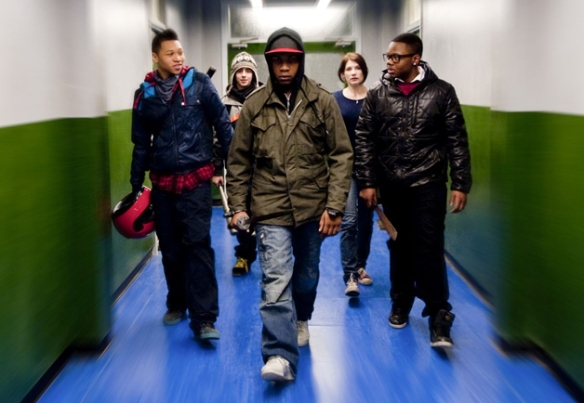 That description makes Attack the Block sound heavier than it is, mostly because Cornish stages it as an intergalactic block party.  He edits the fight and chase sequences with such fluidity that it often feels like a violent dance.   An early sequence when Moses and his friends flee the aliens on the street and make their way to the elevator is the movie’s most effective sequence because it walks the tightrope of camp and authenticity.

Most of Attack the Block is a balancing act of sorts.  If Cornish had hesitated for a second in portraying a gang in South London, he would’ve been called an out-of-touch yuppie.  Instead, he collects a eclectic cast of mostly unknowns and offsets the side character cliches (sassy one-dimensional females, drug dealers with a hip-hop music video self-image and an expensive car) with some genuinely unique characters.

Outside of the alien infestation, the core relationship at the heart of this movie is between Moses and Sam.  John Boyega is a skilled newcomer who gives Moses the right amount of feeling without overplaying his hand.  This is a strong, silent type performance that lies mostly in the eyes.  Jodie Whittaker effectively plays off Boyega’s lead performance, creating an empathetic but tough character that is meant to be a portal into this world that many will be unfamiliar with. 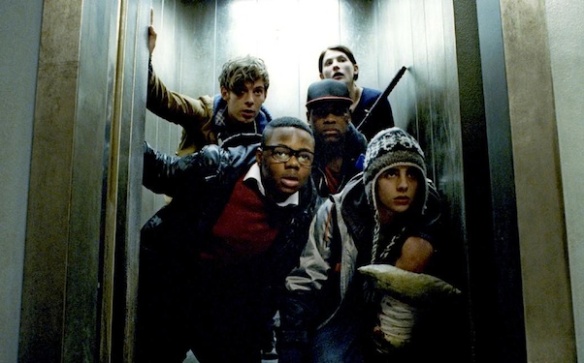 Cornish spends less than five minutes developing these characters before the initial alien crashes to Earth, yet at the end you feel as if you know them all.  His method of character development is on-the-go, favoring frantic conversations in between assaults.  Each character has such a unique voice that it works.  They are all from the same apartment building, but vary greatly.  In one key scene, Sam finds herself alone in Moses’ apartment to prepare a trap for the aliens.  She looks like she’s on a foreign planet when she’s only seperated by a few floors.

At the end, the characters who haven’t been killed off find themselves in a penthouse that doubles as a pot shack.  The owner, Ron (Nick Frost, the only recognizable face here), is held hostage by a thug who is out for Moses’ head.  But after the aliens burst in and deal with him in their own way, they are all at the top of the building.  Forced to be around each other in these dire circumstances, this is the one point in the movie where Cornish deliberately beats home the theme.  The pot shack tints the screen in a way that alien rides at theme parks are lit.

Attack the Block is smart enough to let you notice things like that without wasting too much screen time beating it to death.  Clocking in at under 90 minutes, it at times feels like you’re watching someone play a video game.  It may sacrifice emotional wallops in favor of spectacle, but it’s a funny, thoughtful diversion with many water cooler moments.  Cornish has a genre-bending future, if he can continue to make effective use of his time like he does here.