Science fiction might be a genre that appears to always be looking ahead, embracing the latest 3D technology, CGI backgrounds or scientific discoveries; but at its core it has always looked at its influences and initial pioneers to give direction to stories that span light years, universes or complex human-political analogies away.

With the names J.J. Abrams and Steven Steven Spielberg attached to a summer monster movie, it appeared we’d be expecting the same expectations-breaking story: big blockbuster, big effects, big noises and big disappointment. Collaborations like Spielberg and Bay’s Transformers series didn’t give us much hope, but Abram’s recent works like Star Trek certainly did. A young gun with a visual track record and a producer with the know-how is a great comparison to Peter Jackson apprenticing Neil Bloomkamp with his District 9, which isn’t the only comparison Super 8 draws with the movie.

To put it briefly: instead of attempting to rewrite the genre as Abrams has done with TV, they flip the pages back, finding the core and simplicity in great story telling with a soft $50 million budget.

Believe me, it can’t any simpler than an Ohio manufacturing town in the 1970’s. There, a group of young middle schoolers are in the process of shooting their very own 8mm zombie film to submit in a local film festival, not much different from what Abrams did as a boy and Spielberg before him. At the center is the film’s make-up director, a shy boy named Joe (Courtney) whose mother had just died in a factory accident, keeping him on a short leash with is macho/closed-off sheriff dad.

While sneaking off shooting a scene one night, Joe spots a pickup truck run through the railroad track in the corner of his eye and derail it, creating a two minute explosion to rival the intensity magnitude and wow of the first few minutes of Abram’s Lost pilot. Though the group has dropped their equipment and ran for their lives, their camera catches the whole thing, including the monster that escapes and causes military evacuation and a whole slew of mess for the quiet town’s residents and the children. 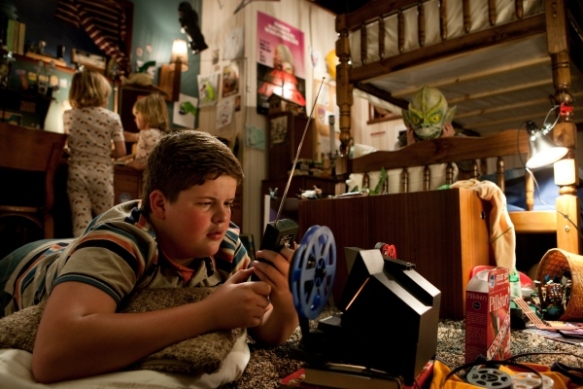 Make no mistake; this is still hardly a monster movie. Much like the glory of Spielberg’s past work, Super 8 is as much about changing adolescent relationships with friends and fathers as E.T is about family or Close Encounters is about dreams. That’s the brilliance in science fiction when the genre is done well. District 9 is an analogy about apartheid masked with alien threat, True Blood about Southern tolerance with vampires and A Clockwork Orange about psychological warfare.

Abrams, who solely wrote the film as well, beautifully crafts the story in the first hour of the film, keeping suspense and mystery in the sci-fi realm, equal if not challenged, with the two different struggling father-child relationships that never come crossed as a studio mandate. It’s genuine and it’s good. Creatively, its parallel to Lost — not just through the use of electromagnetisms, smoke monster noises or Michael Giacchano’s pleasing score — with the sci-fi narrative giving way character driven conflict. The characters do well, especially in the hands of Fanning, Chandler, Courtney and Griffiths.

This isn’t to say that the film lacks its flare. Although in no comparison to the dazzle and technical filmmaking mastery as we saw in Star Trek, the film has production value from beginning to end.

The great thing about Super 8 is that it doesn’t mock or pay tribute to the works of Spielberg in his early years like E.T. or Close Encounters of the Third Kind; instead it creates something that could fit both stylistically and narratively into the same archives. Even as special and rare as this may be, Super 8 is just a thumb among too many handfuls of sore ones. Though it isn’t pumping oversized effects with beaten plot, it’s doing what summer movies should and what amateur filmmakers with their handheld cameras should: it’s going under the radar and entertaining with technique in mind and story at heart.