Five-and-a-half hours in the shoes of a terrorist that most people have forgotten about isn’t somewhere most people would want to spend their time.  Yet Carlos, the expansive epic from French director Olivier Assayas, moves through its unheard of length with enough energy to fuel five American action classics.  That fuel isn’t powered by explosions and gunfire, but by the sheer intrigue of the story and the mythic figure being deconstructed at its center.

Carlos The Jackal, a native Venezuelan, began as Ilich Ramírez Sánchez before he decided to revolt against Israel as a member of the Popular Front for the Liberation of Palestine (PFLP).  He moves from minor assassinations to bombings to bossing rather quickly.

One big surprise in Carlos is how the director shows us how many of these terrorist attacks were botched.  It becomes clear early on, when the murders are up close and more complicated than a gunshot, that Assayas isn’t idolizing his criminal.  Carlos may think he’s Scarface, clutching his testicles in front of a mirror after pulling off an attack, but his constant failures and the desperate way Edgar Ramirez portrays him show otherwise.

Carlos was originally shot as a three-part miniseries, yet many film critics rank it among their best films of they year because it was also released in theaters.  The production values are astounding, often suggesting a master of the epic like Ridley Scott at work.  Yet Carlos is a multilingual experience in addition to its many locales.  French, Spanish, German, and Arabic are all spoken in addition to English, which in its own way ties Carlos to many of his international contacts.  It shows the globalization of terror more successfully than any other film about terrorism.

As it becomes more and more clear that Carlos is more bourgeoisie egomaniac than violent idealist, the film firmly establishes itself as a masterwork.  In a stunning, hour-plus long sequence of his famous raid of an OPEC meeting in 1975, he utters perhaps the film’s most important line: “You may have heard of me.”  The cause is important and all, but not nearly as much as his reputation.

When he becomes too much of a celebrity for the PFLP, he forms his own organization.  Posters of Che appear in the background of a few shots, and it becomes clear by his wardrobe midway through the film that he thinks he is on the level of “fame” as that revolutionary.  Following the OPEC raid, a car drives him past a group of photographers.  He puts his sunglasses down and peers out into the glinting sunlight as cameras flash at him.  Obviously amused, he pretends not to bask in the moment and leans back into the car. 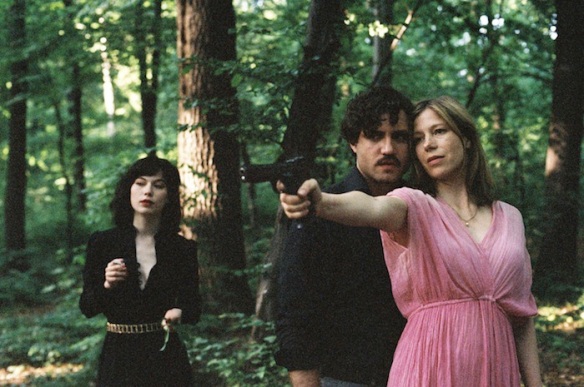 The movie traces Carlos’ life for a little over two decades, beginning in ’73 and ending in ’94.  The earlier, more interesting part of his career is thankfully given most of the attention.  His establishment as a kind of celebrity terrorist carries his ego over the many mission failures and lands him in the late ’80s and ’90s with a few extra pounds and a nagging wife.  Assayas starts getting bored here, but he finishes out the film admirably even if the pacing isn’t as exhilarating.

Music is a key to the success of Carlos more so than any non-musical in recent memory.  The sudden sonic explosions give such life and vibrancy to the events that you feel like you’re watching history infused with lightning.    For the most part you are, though it’s not in the glorified manner of The Patriot or Pearl Harbor.  I hesitate to draw comparisons to There Will Be Blood, but the use of music to keep the story exciting and help put us inside the character’s inflated sense of self combined with the lack of sympathy you’ll feel for him warrants that mention.

Edgar Ramírez’s portrayal of The Jackal doesn’t judge his character, even as he shows an alarming disregard for human life and fondles a mistress with a grenade as a type of demented foreplay.  He plays him for real, much like the rest of the movie does.  There’s no Daniel Day-Lewis greatness to his performance, but the movie doesn’t call for it either.  The huge amount of characters bombard the viewer and the sub-scripts at the bottom of the screen introducing most of them won’t help you remember, but Ramírez holds the center of the film perfectly.

Visionary films with such a pulse are hard to come by in modern films.  You certainly wouldn’t find a film that speaks so much in so many different languages on the Hollywood side of Inglourious Basterds. It’s odd that you’d have to look to French television to find one of the best epics to grace screens in years.   In the case of Carlos, the future of film thought big on more small screens than silver ones.