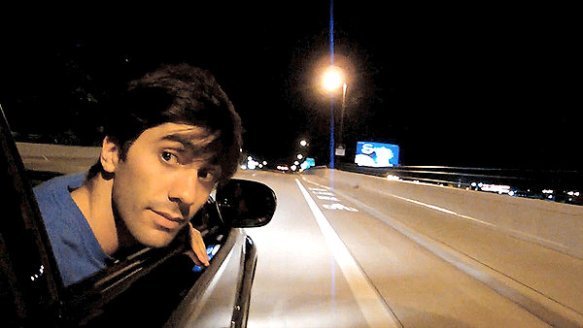 Catfish, the documentary yin to The Social Network’s yang, begins innocently and romantically enough.  Yaniv Schulman, a photographer from New York, begins a romantic relationship online with a girl from Michigan named Megan.  Of course, for the movie to be interesting or even worth releasing, it can’t stay that simple.

The tone of this documentary is not quite journalistic, but leans more toward the Michael Moore style of documentary filmmaking.  In essence, that means it takes a point of view beforehand, and opts for entertainment rather than insight.  When this relationship with Megan delves into the creepy, the filmmakers aren’t quite willing to take that unbiased leap.  We don’t explore the world of Angela Wesselman, Megan’s “mom,”  as much as we observe her as if we were at a zoo.

Yaniv Schulman is the proposed protagonist of the film, but since the directors are his best friends, or course he appears in a more favorable light.  They egg him on, perpetuating a mission to Michigan to confront Angela and find the truth when this situation could’ve easily been laid to rest; another online scam blowing endlessly in the wind.

Those major criticisms aside, one can’t help but be fascinated by Catfish.  It pulls you in with its slick editing and sometimes even beautifully made passages.  These New Yorkers live an urban life of beauty they seem to take for granted.  When they arrive in rural Michigan, the culture clash is evident in the contrasting appearances.

What helps this film the most is that these filmmakers’ efforts don’t end up being a wild goose chase.  Their subject, no matter how unfair her treatment, is located, confronted, and even examined.  The most interesting moments are when Yiv interviews Angela about her actions and peels back a few layers of her motivation.  We also see those motivations in her home life, with a relatively naive husband and two mentally handicapped children who take up much of her waking life.

Angela is not so much a byproduct of the Facebook Age as she is one of the defeated human condition.  She reaches out to the online abyss, hoping to make some sort of desperate connection.  That’s the real story here, no matter how clouded it is in redundant exposition.