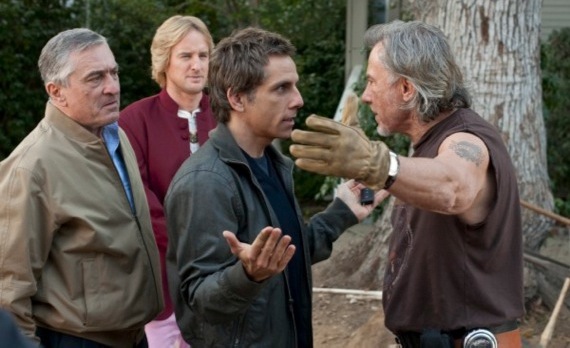 It has always been about fear for the Focker franchise.  The fear Greg (Ben Stiller) has of his father-in-law/ex-CIA agent Jack (Robert DeNiro) and vice versa.  For two films, thanks to a handful of other comic aids, that unlikely comic duo has become weirdly iconic.  Like The Godfather franchise, which this movie apparently thinks it’s worthy of spoofing since it stars DeNiro, it’s time for the unnecessary third installment.

In yet another uncomfortable moment between Jack and Greg, this time at some snooty prep school that Greg is trying to get his kids in, Jack talks about being a shepherd taking his family out to graze.  This is the central conflict of the movie, the passing of that title onto Greg and seeing if he is worthy.  Unfortunately, there is no such figure to guide either the horrendously unfunny screenplay or the large, famous ensemble cast to greener pastures.

Paul Weitz, who takes over for Jay Roach, has no idea what to do with DeNiro, Stiller, Dustin Hoffman, Barbara Streisand, Jessica Alba, or Harvey Keitel.  Then again, such a diverse ensemble of various methods would surely trip up many directors.

Alba gets more screen time than anyone but Stiller and DeNiro, an odd choice and yet one of the few that actually pays off for the film.  She seems glad to be there, and although her peppy seductress is completely unnecessary, by the end you’ll be glad at least someone forgot to tell her she didn’t need to act to be in this.

It’s hard to dismantle a movie that was clearly made with no intention of being good or even entertaining.  It’s yet another part of the Hollywood Industrial Complex (borrowing that term from an unknown source), a comedy whose story is so rehashed that you have to rely on laughs to get anything out of it.  Little Fockers can’t even manage that, rehashing limp penis and gay gags, then wrapping it up with a cheery Christmas epilogue and shipping it out of the warehouse.