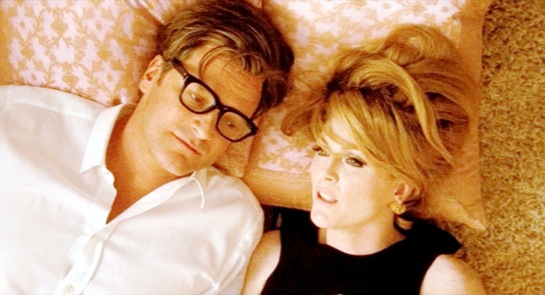 Looking for that depressing British movie about interesting broken people?  In A Single Man, director Tom Ford’s impressive debut, you’ve found it and then some.

After his lover (Matthew Goode) dies, George Falconer (Colin Firth), an English professor in early 60’s L.A., falls into a deep sadness.  Much of the film revolves around his plan to kill himself and the different things distracting him from it or holding him back.  He goes over to his best friend Charley’s (Julianne Moore) house to get boozed up and talk, has an encounter with a gay James Dean-wannabe outside a liquor store, and has an interesting chat with the neighbor’s daughter at a bank.

All of these events, combined with a prospect at a rebound lover in a young student (Nicholas Hoult), prevent George from pulling the trigger.  I went into this film expecting an Oscar-worthy performance from Firth, mostly just because he was nominated for one.  Though he delivers a quietly devastating portrait, I’m not sure he would’ve been nominated on a year with more memorable lead performances.

As his best friend, Julianne Moore makes her one big scene mostly count.  Firth and Moore make you see the tattered yet strong bond of friendship shared by George and Charley. It’s one of the highlights of the film to see their pillow-talk on the floor turn into a loud confrontation and then come back down again once they realize what they’re doing.

Matthew Goode is quite good as George’s dead lover.  We see a tender, loving relationship in vivid color flashbacks, except for one, which is shot in a beautifully done black and white sequence.

Ford is responsible for the color schemes though.  He’ll shoot a room to look lifeless and gray with only George in it, and then when a flashback occurs in the same room it will be full of life.  While at times it can be distracting, for the most part it was a beautiful decision.

As far as debuts go, he could have done worse.  With a fantastic performance from Colin Firth as well as a beautifully written script and a set design that really evokes the time period, A Single Man is a triumph you’ll want to talk about with your friends.

1 thought on “REVIEW: A Single Man”